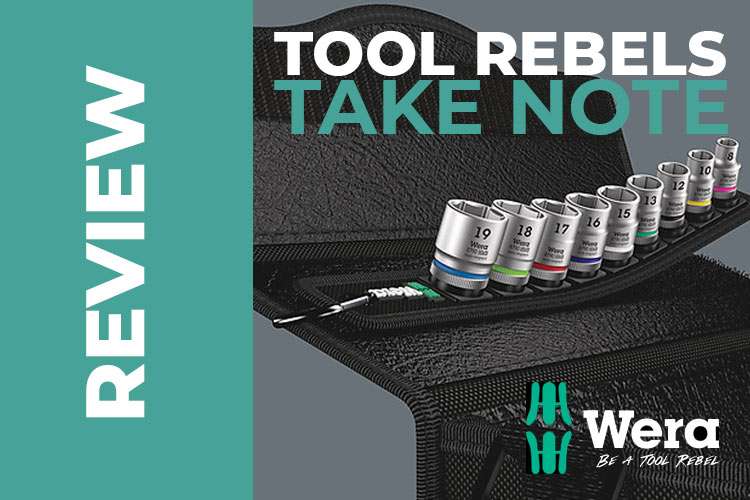 Being a Wera Tool Rebel requires quite a bit of homework in order to keep up with the almost constant stream of innovation emanating from
Wuppertal. Wera often thinks of things we need before we know we need
them.

However, ‘ordinary’ end users need not fear because a quick trip to a Wera stockist and a quick explanation of the problem will most
often see you emerge with the solution.

The common themes for the kit I was sent to try out for this review are, Take it Easy tool finding, holding functions, better organisation of your Wera system and therefore better access. By adding these functions Wera manages to evolve the systems for its end users. The tools and sets become more customisable, more organised and a lot easier to use than the traditional jumble of bits in a bag. There is absolutely no excuse for being a badly organised Tool Rebel.

The Tool Belt is an interesting idea – a set of tools attached to a short (22cm) belt or strap. The belt is rigid enough to support the outstretched weight of the tools and yet flexible enough to bend into a circle if needed. If you need to hang the belt from your trousers, then a handy miniclip is supplied. The tools would then be fully visible for easy access and instant storage. It doesn’t take too much imagination to work out that this is a great solution when working up a ladder – the tools you need are available, organised and easily recognisable – not a jumble in the pouch pocket in your trousers.

Or you could use the hook and loop on the back of the belt to attach it to the 2Go storage/transit case, a rolling trolley or a workbench. I was sent three tool belts to review. The first was a set of 9, ¼ inch drive sockets –
covering the range of popular sizes from 4mm to 13mm. The Take it
Easy system ensures that they are recognisable not only by bold
white numbers on a black background, but also by a coloured
band around the base of the socket just below the knurling that makes for easier finger tightening. I like the fact that the numbers are big enough for me to read without my glasses. The sockets are held in place on the belt with a simple twist and lock system, so they will not fall off. If you look carefully inside the sockets you will see a couple of ball bearings and an ever so slight bulge inwards. These hold a nut firmly so they don’t fall into the depths of your work, or if you need to introduce a nut to an inaccessible bolt. Wera is already ahead of you – a flexible rubber nut ejector is provided too.

The second belt is a handy array of 8 hexagon drivers from 2 to 8mm. With all the features of Take it Easy, knurling and laser etched sizing and coloured band recognition, Wera has also managed to introduce the Holding Function on these via a spring loaded ball bearing system and the Hex-Plus Geometry of the bits themselves. In short the hex socket screws bolts don’t fall off even if you hold them pointing downwards. The last of the belts is a set of 9 Torx bits – colour coded, laser marked and with Wera’s clever Holding Function made possible by a subtle tweak of the spline geometry.

Tool Belts? – For me a perfect way of organising bits. By using a belt, they stay organised, are easily accessible and you can take what you want to the work site via your 2Go case.

I use L-Keys regularly – just enough to know that I need to upgrade the 15 year-old ones in my toolbox. When faced with a small selection of the Wera L-Keys, I realised just how much things have moved on. The biggest set in the review was a set of 9 keys ranging in size from 10mm to 1.5mm. For easy recognition they are all colour coded on the sleeve as well as marked in black numbers. The colour coding by size matches the same sized corresponding item in the In-Hex sockets mentioned above.

The set is presented in a foldable rubber holder with a slide catch. The long end of he L has a ball shaped end to allow some flexibility of angle to the hex socket. I find this a very handy feature. When it comes to the tool holding function, the 6 bigger ball ends use a similar ball bearing retention system as mentioned earlier. The Hex-Plus geometry on the short ends of the keys produce a flat driving surface to spread the torque loading (they don’t drive off the points as standard keys) The result is more torque capability and greatly reduced rounding.

The smaller Torx set in the review consisted of 9 pieces, again, all easily recognisable via colour coded and printed sleeves. The key holder
keeps them firmly together and it opens out for easy access. As with
other Wera Torx bits, the subtle tweak of the Torx geometry allows the tool holding function to work on even the smallest sizes of bolt. Definitely
going straight into my toolbox.

The last bits of kit in this review are used constantly in many trades, and as I know from experience, having good kit saves time and money and is often safer too. I really liked the set of 10 holding function sockets. In a semi-rigid case they cover popular sizes from 10 to 19mm. They are held in place sing the ‘twist to unlock’ system, each is colour coded using the Take it easy colours and each is marked in bold letters with its size. No
more rummaging in a bag of sockets for me. Each socket has a
knurling for easy hand tightening and uses the double ball bearing system for tool holding. These ½ inch drive sockets are robust and are a perfect match for the Wera Zyklop drive.

Of course, the case has hook and loop fixing on the back so it can be attached or removed from wherever you need it including the 2Go carry system. A small set of 5 extended hex keys with ¼ inch drive sockets may not be the most commonly used sets, but this too comes with Take it Easy tool recognition and the screw holding function. The system has been implemented very comprehensively so that compatibility down to the smallest items is complete. So that’s why there are Tool Rebels – are they the ones who look organised and efficient?

When it comes to updating your Tool Rebel Kit, Wera makes it easy by having individual pieces, sockets, drives etc available to buy separately so there may be no need to buy a complete set. Wera Tool Rebels aside, with all the detailed work and specialised fastening and fixing required these days in plumbing and electrical trades especially, it makes a lot of sense to look into acquiring a systematised set of tools that helps keep them organised and able to be used most efficiently. They need to be on hand when you want them with all the correct sizes in place.