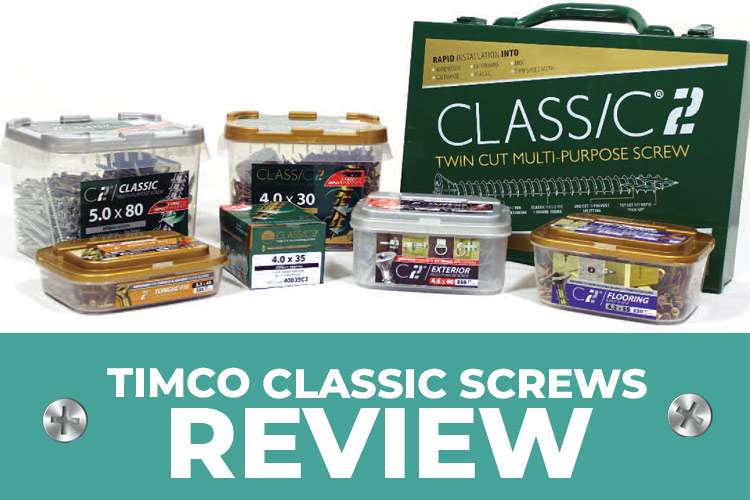 A bit of history first. The company, TIMco, (T.I.Midwood and Co Ltd) was established in 1970 and was in the business of importing and wholesaling screws, fastenings, fixings and power tool accessories. By 2016 it had a workforce of approximately 110 and a multimillion-pound turnover. The company also owns the Addax brand of specialist power tools and in 2010 also acquired Firmahold, a leading brand in collated nails and nailer fuel cells. Based at Nantwich in Cheshire, with offices in Eire and Taiwan, the company now trades in the UK, Ireland and Europe. From its HQ in Nantwich the company
aims to deliver within the UK in 24hours or to Europe within 48 hours.

The point of all the above is to show that TIMco is a well-established supplier with deep connections in the fastenings and fixings business, and having sold literally billions of screws, it deserves to be taken very seriously.

I was sent a few boxes of the TIMco Classic C2 multi-purpose screw to try out for this review. It is a development of the popular TIMco Classic that has sold over 4.5 billion items during its shelf life.

Things never stay the same, in screws as well as most other areas of life, so the C2 was evolved to meet current standards and preferences, reflecting some of the changes and developments in driving technology, regulation and end user demands. The first thing to notice about the TIMco Classic C2 is that it uses a patented twin cut technology that in tests has achieved a 43% quicker screw time using half the torque from the drill driver. This means that cordless driver batteries last longer and users expend less time driving screws.

A very close look at the tip of a Classic C2 will show you what the twin cuts are all about. Right at the very sharp tip, a slot has been cut into the thread pattern. Effectively this slots acts like a cutting edge when the screw is driven, effectively drilling its own pilot hole. Then just a little further up the thread a similar slot is cut.

This slot not only cuts but also clears, allowing the screw to speedily make its way through the material. The slots are not randomly placed on the thread, they are positioned exactly relative to each other in the same places on every screw for consistent results and performance in a wide range of materials like wood, plastics and even sheet metal. I like having a sharp point on the end of a screw to enable quicker starting.

The Classic C2’s point is so sharp that it can be pushed into the timber (especially softwood) even when mounted on the end of a driver bit so that all that it takes to start the screw is to push the trigger on the driver. Without all the official measuring equipment need to confirm the speedy starts and reduced torque needed to drive the TIMco screws, I just drove several score of them into a variety of materials like softwood, plywood, MDF and some plastics. They do perform well and are very easy to start. To drive the screw straight into the wood it helps if you utilise the sharp point to get it at as near as possible to right angles to the material before activating the driver. The drive from the thread and point is so quick that if you are not careful they can go in so fast that they defy correction to
right angles.

A close look at the thread will confirm that it is quite widely spaced but very sharp –edged. The thread is also well defined so that it will cut into the substrate material and hold firmly. It reaches almost all the way up the straight shank of the screw, leaving just a few millimetres clear between thread and head. The design of the head of the screws has been developed with several “ribs” underneath that allow the screw to seat properly in a countersunk hole and effectively make the screw self-countersinking. The “ribs” also help to reinforce the head for strength – needed with modern powerfully torqued impact and drill drivers.

Finally, we come to another key element of the Classic C2 design, the driver slot. I have actually junked part-used boxes of screws with driver slots that will not co-operate with me. They waste my time and I hate the noise of a bit camming out of a badly designed slot. To my mind, the sound of failure.

Some will say I need to replace my driver bits more regularly – I do, and they are good quality bits, so there! The C2’s driver slots are deeply and accurately machined and will hold onto a decent driver bit by friction alone – helpful sometimes in offering up a screw to the workpiece.

Also included in my package of C2 Screws was a box of C2 Exterior screws with a silver ruspert plating. This is said to offer superior corrosion resistance and are designed to be used on everything from decking and fencing to fixing external latches and hinges. Maybe I will get the chance to tell you how I got on with those in a year or so! All in all, the new Classic C2 design screws are a quality piece of
kit that has all the features needed for general purpose users, whether for internal or external applications.

Pity I used so many for testing, they could have been more useful on an actual job.

For the retailers TIMco makes the packaging and display options easy too. There is the option of the Classic C2 Trade case – a metal case with over 1,800 screws in it – ranging in sizes from 3.5
x 16mm up to 5x100mm. Easy to stock for retailers and easy to carry for end users. Standard cardboard boxes of TIMco Classic screws are marked for identification for size and gauge in easy to read black letters on a white background – my aging eyes are grateful for such clarity.