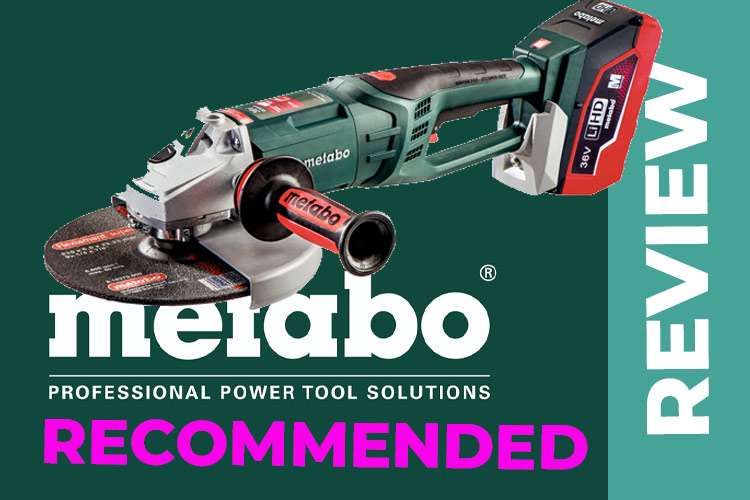 The vision of the future for many power tool manufacturers is the cordless worksite – and on many levels it makes sense. The freedom of movement provided by cordless tools is great and the tangle of trailing cables plugged into heavy transformers is something I wouldn’t miss. But we can’t to say goodbye to mains power just yet – despite our best efforts, batteries still need charging and they still run out at inopportune moments. But if you ever needed proof that a cordless tool can perform as well as a corded one then just have a try with the WPB 36. What is also very clear is that this cordless lacks none of the refinements and features of a corded version – so you are not getting a cordless poor relation version of the “real” thing.

On first reaching for it out of the box I had a thought that I might find the weight of the tool a bit much for daily work. It weighs a cool 6.1 Kgs but actually after a few attempts at putting it into a working position I came to realise that the design of the handles and the weight distribution makes for a comfortable balance. The 36v, LiHD 6.2Ah battery pack is used on one end of the handle to partly balance out the grinder head where all the action is taking place. Having a good amount of weight on the cutting end combined with the stabilising force of the whirling disc helps to keep the disc safely in the cut and less likely to kick back dangerously. The main handle has a number of features that aid easy use.

Firstly it is large enough to easily accommodate a gloved hand and there is ample grippy rubber on top of the handle for a good hold. As has been the practice for many years, items picked out in red on a Metabo tool are controls. So picked out on the long black trigger is the red safety lock button – to start the machine it is simply pushed forward with the side of the forefinger and the trigger can then be pressed to start the motor. On the top of the handle set into the black overmould is a dual function red button.

This can be depressed so that the back handle can be rotated 180 degrees in 90 degree steps to suit a users’ preference. This feature is common even on some of Metabo’s smaller grinders and I was not at first that impressed with the idea, as it seemed like an unnecessary complication and a way of tangling internal wiring by constant movement. However, there was nothing quite like working on a “real” job in a tight space at an awkward angle for me to realise that having a number of holding and tool presentation options is easier and usually safer because I could retain a firm grip on the tool for better control of the cut.

Aimed at: Pro users who need the capability of a 9 inch cutter but the freedom of a cordless
Pros: powerful, effective and- cordless!

The red button also serves as an indicator that the machine is running and, as I came to find out quite quickly on the first job I did with this machine. It also indicates (when flashing) that the electronic battery and motor protection circuits have cut in and stopped the motor and will also indicate if the battery has been overheated or needs recharging. I quite like the idea of electronic idiot proofing on modern cordless tools – largely because heat build up in batteries and motors is their number one killer and the scientific consensus seems to be that the reasons why batteries explode or burst into flames is because they become too hot from too much power drain at once. Also, batteries are now an expensive part of a cordless tool – it seems like good sense to look after them to ensure maximum battery life. Metabo takes this so seriously that you might notice the alloy plate mounted on the rear handle just above the battery housing – to protect the battery from the inevitable sparks created by the cutting discs.

Moving forward to the working head past the motor casing there is a sticker with four main features of the tool marked on it – namely brushless motor, electronic safety clutch, restart protection and the soft start feature not to mention a fast brake also! Perhaps more visible is the large auxiliary handle that has grippy red mouldings, flanges to prevent hand movement and a vibration-reducing collar between it and the tool. The handle can be screwed in, in three different places – left, right and centre, so that users can choose the best holding configuration for safe working. The cast alloy head is well finished and slopes downwards to reduce the bulk of it for easier access to the job. The important spindle lock button is handily placed for easy access for one hand while the other wields the pin spanner needed to remove and replace cutting or grinding discs.

The well-established and excellent Metabo system for moving and adjusting the cutter guard is another great feature here – simply lift the lever, move the guard and lock the lever again. It takes seconds and makes life so much easier when having to adjust the guard at different stages of a cut. Metabo sent me some excellent quality cutting and grinding discs for the machine, but before they arrived I was so keen to try the machine out that I used some cheaper discs on a big job that had been pending for a while. What I learned was this – and it is only common sense – that better quality discs make for an easier cut or grind and also make the battery last a great deal longer. I managed to use up a battery with the cheap discs in about twenty-five minutes – along with several warnings from the flashing red light that I was overloading the motor. With the Metabo disc mounted, the sparks were uninterrupted, I did more cuts and I still had more than a quarter of the battery left. This was true for both cutting with a diamond disc and grinding with a composite disc. For those who want cordless freedom, the WPB 36 LTX BL 230, to give it it’s full title, is a very good solution. It is genuinely capable and excellent to use as well as having all the electronic protections built in. Go for it!