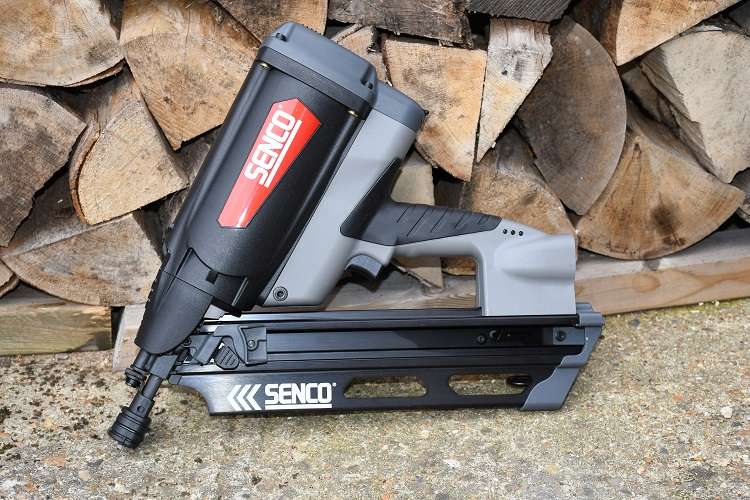 NAILING ain’t what it used to be. In the ‘Old Days’, competition between gas and pneumatic nailers (and the humble hammer) was all we had to choose from, but the arrival of several very effective cordless nailers has added another dimension to the competition, says PETER BRETT.

More choice for consumers can sometimes mean a return to the drawing board for some of the competition and my guess is that the Senco SGT90i is a result of a rethink and redesign so that it has all of the features it needs to stand proudly on its own merits. In my review I will try to focus on these points and see how they stand up, and I will also run it past a few builders to hear what they think.

The SGT90i comes in a robust case with quick-release metal catches that looks like it will last for the working life of the tool. It is customised with a place for everything including the tool itself, two lithium ion battery packs, a charger, some safety specs and a couple of hex keys. There is space to fling in a few rows of collated nails but this temptation needs to be resisted, not least because of avoiding contact with the battery packs.

Is weight an issue?

There is no getting away from the fact that pretty well all powered nailers are bulky and heavy, but good design can mitigate handling issues by distributing weight carefully and ensuring that key dimensions are chosen carefully. With an all up weight of over 3.5 kgs, the Senco is around the sort of weight expected from a framing nailer. However, it does look and feel a bit bulkier than other designs on the market.

A key measurement of 377mm in length means that it is easy to pass through joists and studding. But, as I have found before, it is difficult to pass judgement at this point. It’s only after you have fired several magazines of nails that you can appreciate that weight may help control some recoil and that bulk is not necessarily an impediment.

Senco has designed this tool to ‘guarantee efficiency and a professional finish with every nail’ – something that every tradesperson would love to have. To this end the SGT90i has been given more power and a battery and gas cartridge that can power up to 8,000 nails per charge – I don’t think you could ask for more.

Another key design feature is the nose piece. It is shaped to ensure that there is no slipping when firing. This is a big safety feature; you simply don’t want to have nails flying at awkward angles because the nose has slipped. For delicate surfaces, there is a simple no-mar pad that can be slipped on when needed.

With two battery packs (which amounts to 16,000 nails) there would seem to be enough power to ensure several days’ worth of power nailing. But we all know that charging battery packs is an easy enough thing to do so I really like the quick charge function. And it really is quick – by charging a battery for two minutes another 200 nails can be powered. That is probably enough to finish the job in hand, especially when it’s near the end of the day. The truth is users should have consulted the LED power gauge on the battery housing before it ran out…

Another feature that should be on any user’s tick list is that the nailer has been designed to operate in temperatures from -7 to +49oC. Although I wouldn’t want to be nailing studs or trusses at minus temperatures, it is useful to know that the tool would work.

The nail magazine is an all-metal affair for extra durability that should outlast plastic designs. Finally, the metal thumb wheel on the nose is used to set the depth of drive without having to reach for any tools – frankly, a feature that I think is a necessity and the fact that it works so easily is much in its favour.

Not having handled a SENCO nailer for a while, I approached the final set up methodically. Each nailer I have used follows a similar pattern but can often be different in key areas. There is scope for doing things in the wrong order so it pays to take care.

The fully charged battery pack (it takes roughly one-and-a-half hours for a first charge) is easy to insert in the slot at the end of the main handle. Three green lights give the user a quick snapshot of the state of charge. Looking at the lights is easier than counting up to 8,000 while you are working!

Before inserting the gas cartridge into the nailer the user has to seat the nozzle onto the cartridge and this does need a bit more care and has a certain knack to do. First time round, I made the mistake of not seating the nozzle completely and ended up with cold gas frozen fingers. Hence it is good to follow the safety advice to do this job well clear of any potential sources of heat or ignition. Funnily enough I didn’t have the same issues with the second gas cartridge! And thank goodness for clear, step-by-step instructions in the manual.

When the cartridge is properly seated, the cover will simply snap closed when pushed in and down.

Adding collated strips of nails is about as easy as with any other nailer I have used and there is a positive spring action that keeps the nails firmly fed into the head.

Once all the set-up is done, all the user needs to do to fire nails is push the safety nose into the workpiece, wait a second or two for the gas to flow and then pull the trigger. All the shots I fired went home with a satisfying bang, into softwood or hardwood.

A couple of things I noticed was that the noise levels are well controlled, so while ear defenders are necessary, an odd shot or two will not deafen you. Also, the weight of the SGT90i is such that the user gets very little recoil through the hand and arm so it feels comfortable and easy to use.

Another thing I found useful was that the nailer will sit on its back, handle up, on a flat surface where it is easy to pick up. The rafter hook is good too – wide enough for the thickest rafter, and yet it folds away nicely.

I fired what was effectively a boxful of nails along with a couple of builders who helped me out with their opinions. What impressed them was the nailing muscle it had and number of shots it could deliver on a single charge. Because of that, they didn’t experience the quick charge function, but in principle they liked the idea.