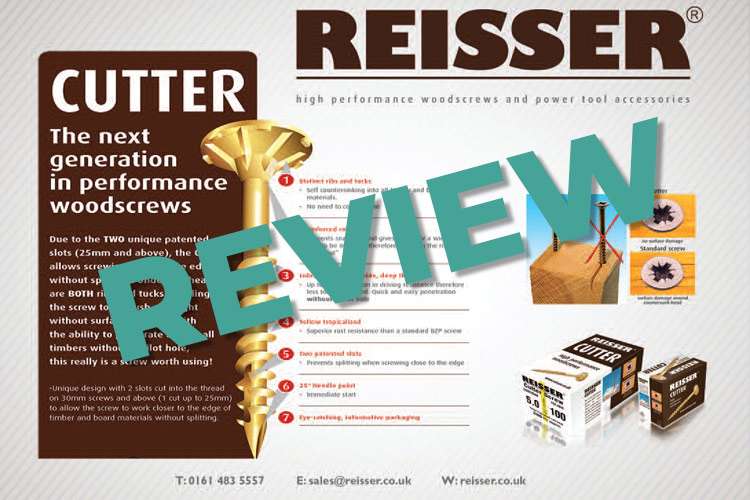 I am very familiar with Reisser screws – having been tempted to buy a ‘Handy Pack’ of Cutter screws in common sizes to fit into my site workbox. The inevitable happened – namely that only some sizes were used up completely and the cardboard box didn’t last the distance without judicious applications of gaffer tape, but at least I can replenish both box and case with the generous samples I was sent for this review!

Get the Reisser Trade Pack of Screws 1600 Pieces

In my experience the Reisser Cutter screws are high quality performance woodscrews with enough features to appeal to a wide audience.

Easy starting when driving screws is a big deal for me. I don’t like having to hold a screw to the timber between thumb and finger and then for it to shred my skin when I trigger the driver. The sooner the sharp end bites and the thread does its job the happier my fingers are. The Cutter screw has a sharp needle point that is easy to push into the timber for easy starting (the straighter the better for a good job) and the two patented cutting slots cut the way through the timber as the screw is driven. For most timbers this means that no pilot hole is needed and driving is pretty effortless.

A closer examination of the wide and deep thread on the Cutter screw also helps to explain why this screw is easy and quick to drive. On the 100mm M6 screw for example the threads are fully 3mm apart so each turn of the screw will drive 3mm deep – even at slow driver speeds this is a good rate of progress! By keeping the shank as slim as possible and with a deep thread, the Cutter screw can do what it says on the tin – it cuts rather than forces its way into the timber. As a result, the Cutter screw will create fewer splits, even near to edges of planks.

The screws also have a yellow tropicalized finish which is generally regarded, in testing literature I have seen, as being superior to a simple zinc plated finish because it acts as a lubricant when driving as well as a rust resistant coating in situ. Having used some of these Reisser screws several years ago for making a log store and a shed, I have had a long time to appreciate that they have not rusted, nor have the slots become clogged. I didn’t try it for obvious reasons, but I am sure that a simple application of the cordless driver would simply unscrew them to reveal a nearly new screw thread.

With torque and power now available on impact and drill drivers at the press of a trigger, it is not unheard of for the heads of screws to snap off when they are driven into unforgiving substrates. The design of a screwhead must be a compromise between easy driving (no extra bulk needed) and strength. The Cutter screw has a reinforced collar that amounts to a slight thickening of the shank as it gently turns into the screwhead. This head also has a combination of ribs and tucks in it that gently create a countersink so that the head self-countersinks into the timber. The power of modern drivers is such that users I have seen can be tempted to drive screwheads below the surface – even without this feature. But this is self-defeating I think, especially if you might need to remove the screws later.

The all-important driver slot on the Cutter screw is deep and well defined and certainly a lot better than some of the screws I have used. It also helps that Reisser includes a generous pack of 20 high quality torsion driver bits in the Cutter Trade Pack that fit the slots very well – could be made for them in fact!