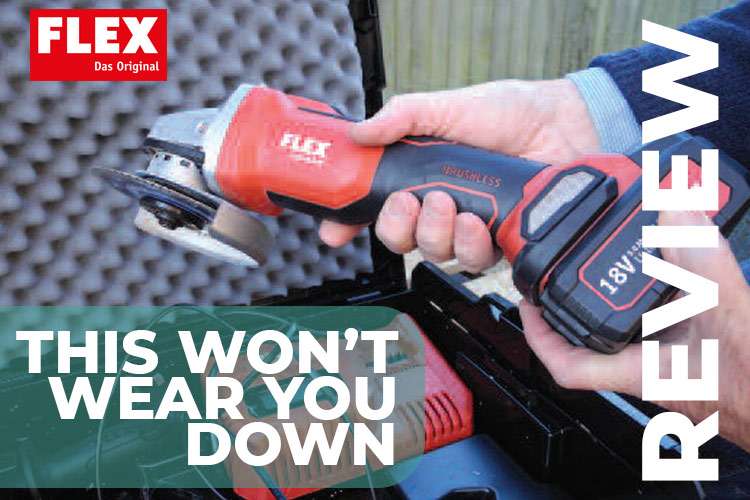 Flex 18v Cordless Grinder – It won’t Wear You Down

Angle grinders are tools that get used hard – sometimes they have lifespan of only a few weeks in the most demanding applications. They are also tools that many trades use because they do the jobs that only angle grinders do. So, it is actually quite important for many users that they find exactly the right one.

Choosing a grinder is not made easier by the fact that the range of prices for angle grinders is bewildering too – a mains powered 125mm grinder can be had for as little as £20, while a top quality model will cost over £100. Angle Grinder Review.

It is even more difficult with the advent of cordless angle grinders – do you stick with your battery platform or not, when it becomes clear that the cordless grinder in the range does not have the runtime/oomph/special features of some of the competition?

Why Choose the Flex?

The new Flex L125 18.0-EC, in my opinion, helps reduce these dilemmas by simply being a very good tool. In the last week, I have been using it intensively on a variety of onsite jobs, from window fitting to cutting concrete, bricks and small paving slabs. For test purposes, I was urged to try it out on marble and granite because these are very demanding materials and a real test of quality.

When I used the Flex on the window fitting jobs they were not that
demanding, but they were varied. Sometimes I needed to cut hardened steel nails or screws, and at other times I needed to trim off bits of masonry and tiles. At this point you realise that you are going to change cutting discs quite frequently, so quick and easy disc changing is important. I didn’t exactly time my changes, but with the included spanner and using the easy access spindle lock button, I could do
it in about 45 seconds, despite the fact that it was a tool that I had only just started using – not an old familiar. Quick change of discs is largely down to the design of the nose of the grinder – it sticks out prominently and is nearly as slim as practically possible for a small grinder. If I held the machine in my left hand with my thumb depressing the spindle lock button, I could use the spanner in my right hand to pull down on the spindle nut to loosen it and then simply spin off the nut and replace
the disc.

It is now also mercifully the case that blade guards have become much more easily adjustable, and the Flex design is amongst the most simple and effective. The guard can be rotated 360 degrees, in a series of click-stopped positions for the most effective disclosure of the disc to the cut, and also for the best position to deflect dust and debris away from the user. The whole gearhead is made of cast alloy and has screw holes for the addition of an auxiliary handle. Also interesting to note is that the ventilation slots above the spindle lock button direct the cooling air from the motor out of, rather than into, the tool so dust is blown away from the delicate bearings etc. It also helps that this has a brushless motor whose working bits are sealed more effectively than brushed motors.

I also rather like the design of the body of this Flex grinder. This is largely because I have small hands, but even a couple of my work colleagues with bigger hands commented that the design suited them too. The Flex-red body has a black grippy overmould where the hand grips and this is smaller than the main body behind the gearcasing. From there it is easy to move a thumb up to the slide and lock on/off switch that actually works. I have come across so many of this type of switch that you need two hands to operate (especially when the dust gets in), that it is a pleasant surprise to find one that works so smoothly.

A comfortable grip on the handle is made more effective by having the battery pack on the back of the body, with its main weight pointing upwards to counterbalance the weight of the nose pointing downwards. Those familiar with Flex machines will recognise the familiar 5Ah battery pack with its four-light test button on the back. Flex has cracked the design for loading and unloading battery packs onto machines so that system works well with a simple big red press and release button on the battery. This machine is compatible with all 18v Flex batteries, so if you have a couple of lighter 2.5Ah packs they would help reduce working weight.

Just a quick note on charging – the Flex diagnostic charger is unique, I think, in having an LED countdown display so you know exactly how long to a full charge. Despite being ‘only 5Ah’ in the days of up to 9 Ah, I had no issues with runtimes. Even with regular usage, I still had half capacity left at the end of a working day. And still a spare battery in the box as a backup.

A Case of Quality

The whole kit came in a sturdy, stackable custom case with top and front handles. I liked the fact that the case could easily hold all the extraneous bits like extra discs etc. My only niggle was that the battery pack had to be removed to store the grinder in its position.

Overall, I really liked this grinder. It has clearly been made to a quality threshold with elements of careful design. It cuts effectively in a wide range of materials, and it goes without saying that users will need to adopt all the correct safety gear with it, because the dust and debris produced is evidence that it is working well. For really effective cutting, choose quality discs with thin kerfs that will reduce friction and give longer runtimes. The acid test is that I would be very happy to add it to
my toolkit because it has proved to be a valuable site companion.