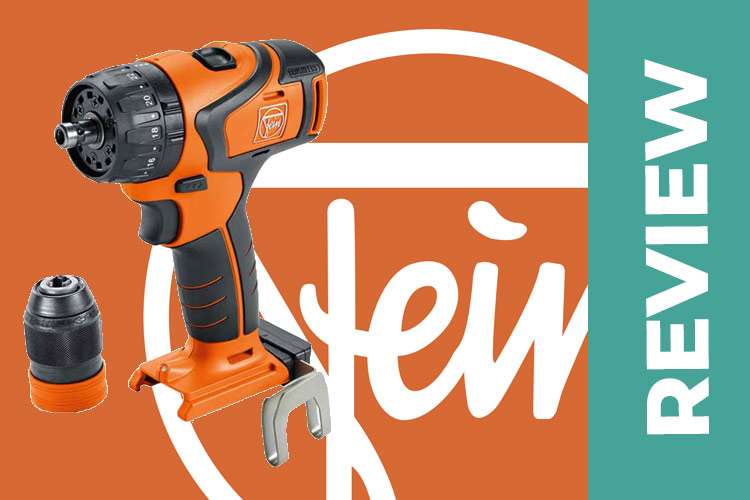 It may seem as though all that the trades want in a cordless drill is endless power and lots of batteries to keep that power constantly on tap. My own experience, and many of the tradespeople I chat to, tells me that there are many fitters of various kinds who don’t need the raw power of 18 or 24volt or whatever, because along with that power comes bulk – and bulk is not great when you are fitting hinges or drawer slides inside a kitchen cabinet, for example. Also, battery Ah is not necessarily that important either.

I have used a small 4Ah cordless combi for several days on a job without having to top up the charge. What a smaller driver also ought to offer is precision control. Two speeds may be enough on an 18v drill where power is the name of the game, but control and accuracy are required on smaller fitting jobs and this is where a smaller 12v machine can be the answer.

Fein is just one of the manufacturers that has developed a compact 12v drill/driver to service the market. What I looked for when I tested this machine on various site jobs was flexibility, versatility, perfect control, ease of use and particularly quick changes between modes. One minute I may be driving screws, the next, drilling small holes and later, sinking a slot for a cabinet hinge. Later I might need to remove the chuck to drive a screw inside a 300mm wide cabinet.

The Fein ASCM12 is part of a range of three 12v drivers and is unique in the sense of having four selectable speeds via a sliding switch on the top of the machine. One of the things I liked about the switch is that it can be moved so quickly between speed settings that you will use them. In fact the more I used the drill and became used to the speeds needed for different tasks, the easier it became to move the switch. Although the trigger is speed sensitive and it is possible to hold a slow speed in whatever position has been selected for starting a screw, for example, the trigger very quickly accelerates to max speed once it is pressed a little harder. Accordingly, the maximum speeds are set as follows, 400, 700, 1,400 and 2,500 rpm, which should allow the user to choose the correct speeds for just about any task and thus retain control.

The Fein ASCM12 follows the usual layout of cordless drills these days – motor along the top casing, T handle and battery pack slid onto the bottom. The “Made in Germany” quality of the tool is evident wherever you look. The carefully placed rubber mouldings that protect the casing and provide the user with a good ergonomic grip, the smoothness of operation of all the controls, and finally the balanced “feel” of the tool in your hand makes it the
kind of “go to” favourite tool that trades like in their toolkits.

I had occasion to thank the rubber “bumper” mouldings a couple of times for their protective qualities – while I was using it on site the Fein fell 2m from a conservatory roof onto a brick followed a bit later by a 1m fall off a ladder onto a wood floor. In both cases, apart from slight marks, the tool was unharmed and worked perfectly afterwards. I don’t usually treat my tools like this – but accidents happen! In retrospect I should have been using the eversible belt hook supplied to attach it to me, but I don’t really like things dragging on my belt. Users have the choice of 20-position torque setting collar for an even spread of torque control when driving screws. Very important on a machine where fine control is one of its USPs. The drill setting delivers full power to the bit where it is easily possible to drill a 40mm diameter hole in wood with the correct bit and speed setting. And the motor brake stops the chuck almost instantaneously when the trigger is released. The torque collar is made from a composite plastic material and works really positively and is mercifully easy to adjust from setting to setting. Reverse/forward is
selected via the push–through switch above the trigger.

The quality steel Rohm keyless chuck matches the quality of the drill. It works well and holds tight with 60Nm of pressure when clicked onto the shaft of a bit etc. To add to the tool’s versatility it has a quick release collar on the chuck. With the chuck removed there is a standard 6mm/1/4 inch hex fitting that will take driver bits etc. Removing the chuck reduces the length of the drill by about 70mm to a mere 150mm, so it becomes even more compact for working in cramped spaces. One of the most important bits on any cordless tool has got to be the battery pack and the Fein ASCM12 does not stint. In the kit you get two 2.5Ah battery packs with a diagnostic charger to ensure their ongoing health and longer life. The battery charger is easily comprehensible – not the sometimes confusing run of lights and beeps that doesn’t tell you much. Charging is quick too – just over the half hour I found. The battery packs are well made and protected with a simple four LED light system to tell you the state of battery charge. The battery pack slide and button release system is positive, doesn’t stick in use and, as I found out, is forgiving even on very cold fingers.

It took me a very short time to decide that I really liked the Fein ASCM. It is light compact, versatile and perfectly suited to the wide range of jobs that I do both in the workshop and on site. It certainly has enough oomph for drilling holes driving screws and general fixing. With four easily selectable speeds on hand the user can stay in control of the job. It also sits on the same battery platform as Fein’s outstanding 12v MultiTalent oscillating tool, which makes for a versatile, lightweight and durable combination.