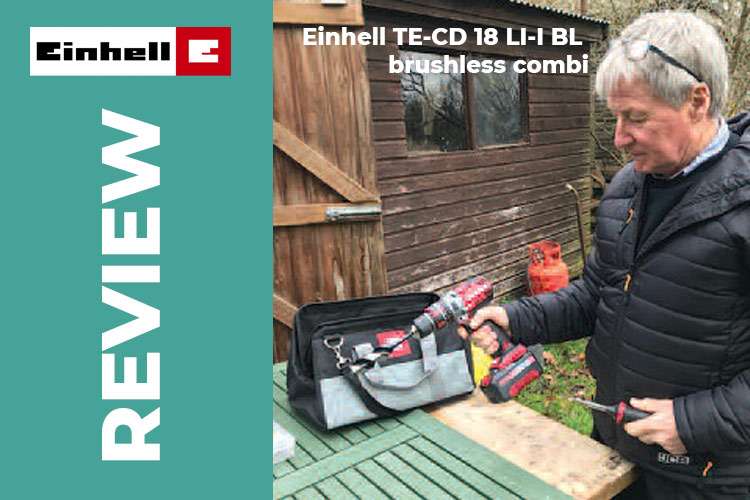 Competition in the market is mostly a VERY GOOD THING for consumers because it tends to give us what we want at the prices we can afford. Only ten or fifteen years ago the kind of cordless combi drill deemed
suitable for the needs of disparagingly named ‘weekend warriors’ would have been entirely unsuitable for a professional user. The Einhell Expert Plus Combi is proof that the lines between the two markets have become blurred. The Einhell TE-CD 18 LI-I BL brushless combi has solid build quality, genuine ergonomic design and capability at a price (around £129 – £139) that is realistic for non-professionals, and will also appeal to trades where it could serve as a back-up tool or used for less demanding tasks. I still regularly hear from trades that kit, particularly expensive kit, is stolen on site. Cheaper kit is obviously cheaper to replace, and it’s a bonus if it is also up to the demands of site work.

What You Get for Your Hard Earned Cash

The Einhell brushless combi follows the general design of most cordless drills these days, with the battery placed on the bottom of the main handle to counterbalance the gearbox and motor above. When you pick it up the tool feels solid and correctly weighted and the main handle has been shaped for a comfortable and positive grip. Textured overmoulded rubber grips are well placed to give the ‘feel’ you need in a tool that is going to be regularly used.

The rubber bumpers theme is extended to other parts of the tool – on the sides and back of the body for example – so that the casing is protected if the tool is laid on its sides. The battery is also protected with rubber protective bumpers on all exposed sides.

The Battery Pack and Related Parts

Staying at the battery end, it is mounted to the tool on a pair of sturdy rails that allow it to slide off and on easily. The release clip is simple and effective with a big red button that can be depressed with two fingers. Just behind the release button is a battery power indicator – three red lights indicates fully charged while only one means that it’s time to visit the charger again.

This particular kit is supplied with a 4Ah Li-Ion battery pack, but smaller and larger Ah battery packs are compatible if you need more power or want to save weight.

After a couple of charges, the 4Ah battery pack took roughly 100 minutes to fully charge, but is ready to use at roughly 85% charge after 80 minutes.

There is also a bright LED light built into the base of the handle that is aimed at the chuck, where it illuminates the work area effectively. For me, an LED light is a must- have on a drill these days. Dark winter evenings and enclosed spaces all underline the need for them – apart from my ageing eyesight.

Another nice touch is the decent-sized belt hook that can be attached to either left or right hand side of the drill handle. The trigger is large enough for a meaty forefinger and is easy to control so that increasing pressure leads to a steady increase in rpm. This control is important in screwdriving. Reverse/forward is selected via the push-through switch behind the trigger. Just above the trigger is a threaded hole for mounting the auxiliary handle. It can be screwed on from either left or right to suit left or right handed users. My gripe is that the handle takes a while to screw on because the thread is over 25mm long, and that it can’t be adjusted around the chuck to aid different drilling angles, but the positives are that the handle stays firmly put, and the handle itself has a grippy textured rubber that will absorb vibration and provide positive hand grip.

Brushless motors are where it’s at currently, and the Einhell has a smooth one with a built-in spindle brake. The two speeds are easily selected via a sliding switch on the top of the casing and should cover the needs for screwdriving (0 -500 rpm) and for drilling (0 – 1800 rpm).
The gearbox is enclosed in an alloy casing and in front of that are two collars – the first black one to select drilling, screwdriving or hammer mode and the larger second one to select one of 19 torque settings. Right in front of them is the keyless 13mm capacity chuck. This proved to be very good in use – it held onto drills etc tightly and was easy to
tighten and loosen.

I used the Einhell for about ten days on site doing a variety of drilling and driving tasks. I found that it worked effectively and felt up to general site work. The typical battery life was about a day to a day and a half. Ideally I would have liked a quicker battery charger and two battery packs for guaranteed seamless working, but you can buy extra battery packs. In a world where the majority of power tools come in custom cases, I was quite pleased to find that the kit came with a semi-hard-bottomed nylon bag that is big enough to hold the drill and accessories, including charger – plus a lot more. The bag has a shoulder strap as well as grab handles and some neat little side pockets for driver bits etc.

Get the Einhell Combi Set

And a Bit Extra…

If you want to improve the effectiveness of drilling and save battery power I would also recommend that you have a close look at the KWB Energy Saving range of accessories marketed by Einhell which provide up to 35% longer battery life – particularly the Japanese-made auger bits. Just looking at them closely will tell you that they are precision made with sharp cutting edges and spur guide points. I compared these auger bits with a couple of the other commonly available bits and
the words chalk and cheese spring to mind.

The holes from the KWB bits are sharply defined, easy to guide and don’t suffer with anything like the amount of breakout of others. Designed for use with cordless power tools, they certainly use less effort, and it is noticeable that the drill doesn’t use nearly as much torque (and therefore battery power) in drilling larger holes. My sample KWB bits are going straight into my site tool kit – ‘ nuf said.