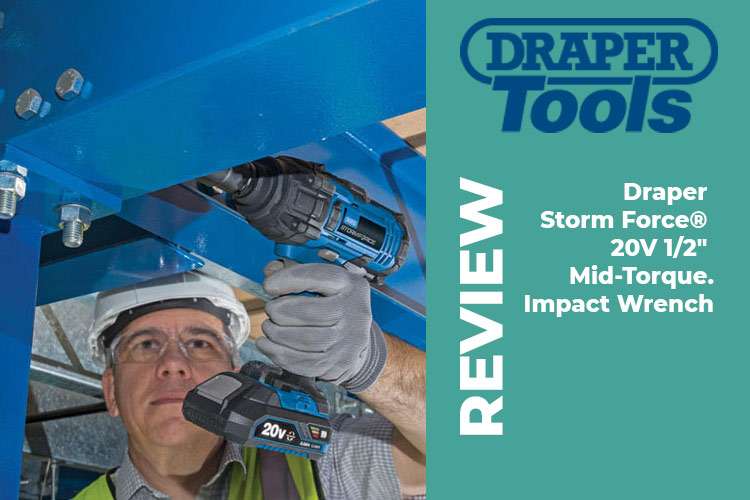 Impact wrenches are a coming thing because there is every reason to use advances in battery technology to free yourself from trailing compressor airlines without loss of capability. Equally, scaffolders can use cordless impact wrenches to cope with the hundreds of nuts they have to tighten and loosen each day, because the tools are small and light enough to fit into a pouch as well as needing only one hand to operate compared to a normal scaffolder’s wrench.
When I had a puncture mended a couple of weeks ago,
the female operative used a cordless impact wrench to save
having to move the car right onto the workshop floor to remove the
offending wheel. It gave her the freedom to save time and hassle.
So, the uses are many and will become more widespread as end
users find out more and more applications in which to use them.

Stepping into the impact wrench arena is the new Draper Storm Force 20v machine. First impressions are that it is a solid and heavy machine – it weighs 1.89 Kgs without its 20v 3Ah battery pack. The handling is helped by a good balance between the meaty all-metal gearbox and housing and the big battery pack on the other end. However, most users will be impressed with the ergonomics – due to the well-designed main handle with ample rubberised grippiness and shaping for a good and comfortable grip.

The trigger sits perfectly onto the forefinger and is speed sensitive. Reverse/forward and lock are selected via the commonly used slide-through body switch and this works well as it is well placed for thumb and forefinger. I found the trigger pretty easy when controlling the speed I wanted, especially when tightening bolts, and with a maximum rpm of 2200 rpm there is more than enough speed available.

There is a sharp spindle brake that stops the rotation immediately the trigger is released. With an impact rate of 2,900 impacts per minute
the user needs to pay attention to the grip they have on the tool and the
orientation of their wrists – this is a powerful machine and can bite the unwary if they do not pay attention to the needs of the job.

Get this DRAPER SET

Sometimes it really pays off to use both hands to support the tool and operate it when its high torque and impact loads come into play. This is generic advice for impact wrenches so s not a reflection on the Storm Force.

When it comes to rubberised padding and bumpers, the Storm Force follows the modern pattern of targeted protection of areas that are likely to be bumped in use, and much fuller protection of sensitive areas like the gearbox casing and on the corners and edges of the battery packs. The protection works, and even though the tool was often put down on rough ground during use, it sustained no serious knocks or scratches.

I don’t think that this Draper machine was designed for compact size because it stands 25cm high on its battery pack and extends 22cm from nose to tail without an impact socket fitted. To me, the design, weight and 20v battery pack spell out power and capability and the prospect of a hard-working service life. This is underlined by the fact that the maximum torque at full power is a massive 400Nm – enough power to break the heads off bolts if users don’t take care.

The Storm Force colours of bright fluorescent green or blue and black help it to be seen on the worksite, and when I examined the body it was very well screwed together. Unusually, the gearbox housing is held together with four robust hex drive bolts for strength.

This tool comes in a cardboard box rather than a plastic case, – this is not a problem because it is most likely to be used in a workshop or chucked into a bag of scaffolder’s tools at the end of a working day. The battery pack has a flat base so the tool can be stood up if wanted, and as I have already mentioned the edges of the base are protected with bumper strips. The battery pack is easy to fit and remove from the tool because of the strong ‘rails’ that locate it firmly. It helps that there is a simple spring catch to release the battery pack rather than fiddly buttons.

On the back of the battery pack is a simple system for checking the state of battery charge. Four green triangles light up when the check button is pressed to indicate a full battery charge. One triangle probably means that it is charging time soon. A one-hour charger is included in the kit and has two lights for simplicity – red showing means ‘charging’ and green means ‘charged’.

When I used the Storm Force for a few jobs on site and around the workshop, I found that it could be as docile as could be unwinding a few 10mm head set screws to replace a decking rail, or powerful enough to remove a rusted/cemented over nut from a wheelbarrow frame. There is easily enough power to remove car wheelnuts – in fact I would suggest using the impact wrench equivalent of ‘finger tight’ before a final tightening to the correct torque with a torque wrench.

After a time, I found that the solid weight of the tool could be quite helpful, as it helps to contain some of the massive torque forces that are unleashed at full power.

Overall, I think that this tool will function well in professional and semi-professional workshops where the freedom to move from job to job without the hassle of moving air hoses around is needed.

A nice little added extra touch is the inclusion of four impact rated sockets that fit well onto the ½ inch square drive. Having broken several of my own sockets on previous impact wrench testing, it made me appreciate the need to use the correctly rated accessories on a powerful 400Nm tool like this.