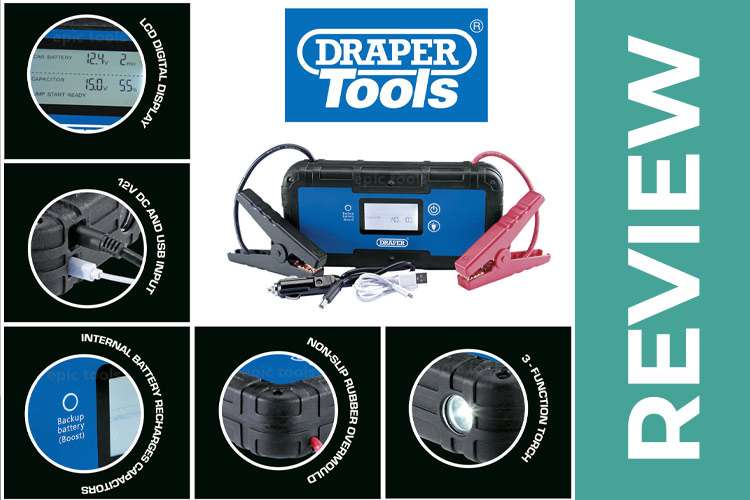 I, like many others, am slowly learning that I cannot do without the smart electronics in my car. It enables the phone and music connections, satnav etc etc – that I rely on increasingly. But these same complicated electronics are so sensitive that merely disconnecting the battery to replace a light bulb can entail an hour’s worth of work resetting all the electronics – from the clock to the automatic headlight dipping.

In simpler times, jump starting an ‘analogue’ car involved just connecting some jump leads from another car battery, making sure the polarity matched up and then hitting the ignition key. 12v was 12v and that was all that mattered.

Get a Price for this Jump Starter

But modern cars are all different and have different balances and systems for their electronics. Hence the need for ‘smart’ or diagnostic jump starters that ‘read’ the systems and inform the users once they are connected. The Draper 12v Capacitor Jump Starter (part number 82957) is just such a device. It is part of a bigger range of Draper Jump Starters and is aimed at emergency starting for petrol engines up to 6 litres and diesel engines up to 3 litres.

It is compact and light – weighing only 1.294 Kgs and measuring 25 cm long, 12cm wide and 5cm deep. The Draper Blue box that houses the innovative electronics is completely surrounded by protective ‘bumpers’ on all the edges and the back has a very handy summary of specs, operating instructions and an all-important warning panel.

The Differences between Capacitors and Batteries

Capacitors and batteries are similar in that they are both ways of storing electricity. Batteries use chemicals to store electricity and because of the ‘delays’ that chemistry has in taking up a charge they are slower to charge and discharge.

Capacitors on the other hand, store electricity in a ‘force field’ between plates and, when called upon, can deliver a burst of power very quickly and at full voltage. Capacitors are usually smaller and lighter than their equivalent battery counterparts because they do not have to accommodate chemical cells and heavy metals.

Easy to use but highly innovative jump starter. Can be fully primed in approximately two minutes, and fitted with advanced capacitor technology, which enables the starter to jump – start vehicles up to 6L petrol and 3L diesel. Unlike most chargers on the market, this charger is fitted with an internal battery, which energises the inbuilt capacitors, enabling the charger to start vehicles even when a vehicles battery is completely flat.

This Draper Jump Starter works on a capacitor system that makes it compact and light – in fact small enough to store in a glove box ready for a starting emergency. It is certainly less of a hassle to have in the boot than a pair of 2-metre-long jump leads I have used in the past.

The Jump Starter comes in a cardboard box that, if it were kept in good condition, is perfect for storing the device, because it protects it from bumps and knocks as well as providing some protection against splashes and liquids.

The Starter has three switches – an off/on switch, a switch for the built-in torch and a switch for the Li Ion back-up battery. The torch has several modes that are selected by cycling through on the button. The first mode is a bright LED light that is useful on dark nights under car bonnets. The second is a quickly flashing light, and the third mode is a Morse code SOS signal. These last two modes provide some light for working by but are also useful as warning beacons if you are stuck by the side of a road.

The clamp leads are quite short with only about 28 cm of reach. This means that, in use, the Starter has to be perched on top of the engine or side wing closest to the battery location. Unlike some jump starter cables, the clamp cables on the Draper are quite light and flexible so they are easy to handle. The copper contact parts of the clamps are largely covered by a plastic sheathing that will minimise accidental contact between them. While they are stiff enough to ensure good contacts on the poles of the battery, the clamp springs are not so tight that they are difficult to handle. They also open wide enough for easy clipping to the battery poles.

Two methods of charging the capacitor are supplied in the box. The first is a standard 12v lead for sliding into the power socket in the car, the second is a 5v USB cable that will also fit most modern cars that can accommodate an MP3 player.

For the first use of the device, it must be charged for 24 hours, though it has been pre-charged during production. This ensures that the Li Ion cells are fully charged ready for the emergency. To maintain a ‘top-up’ charge after the initial charging, the USB charger will take about four hours to top up the battery, while the 12v DC lead will charge the device in around 50 minutes. Using the Jump Starter is simplicity itself. Connect the two cable clamps to the correct battery terminals and press the power on button the LED display will indicate the voltage and internal resistance of the battery. If your car battery had enough remaining energy to charge the capacitors then you will see the display indicating that the machine is taking on charge, if not then then press the back up battery boost button to charge the capacitors from the in-built lithium 10v batteries

After a couple of minute’s charging, the capacitor is ready to start the car as indicated by the LED “display jumpstart ready”. If all does not go

to plan after ten seconds of turning the car engine over, then the device will have to be rested for about 30 seconds before trying again. Connecting the clamps to the battery terminal can also tell you via the LED display whether the battery is chargeable or whether it needs replacing. The recent below freezing weather has seen the Draper Jump Starter doing some sterling service for the cars in my close, with one neighbour who is too mean to buy a new car battery, having to use it every morning for a week. There is no doubt that its compact size and ease of use make it a very useful device.

There is no doubt that garages and roadside emergency services would find this useful – as they could have it charged and ready in their vehicles.