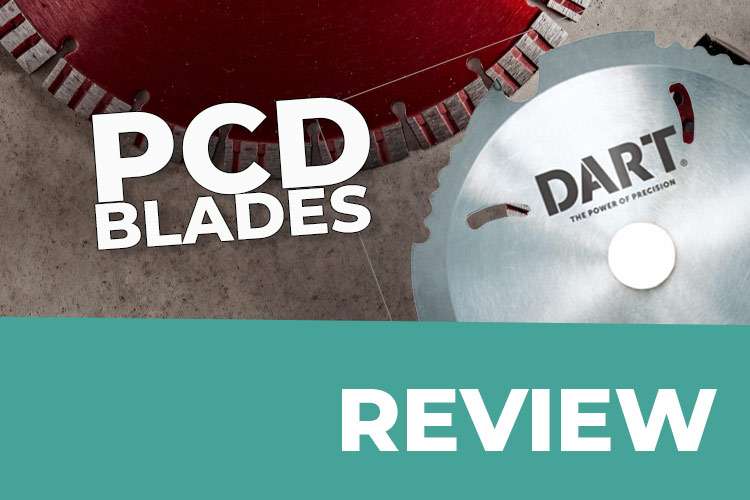 PCD is a polycrystalline diamond, manufactured by sintering together carefully selected diamond particles at a very high temperature and pressure in the presence of a solvent/catalyst metal. The result is an extremely tough inter grown mass of randomly orientated diamond crystals bonded to a tungsten carbide substrate. PCD, therefore can be regarded as a composite material which combines the hardness, abrasion resistance and high thermal conductivity of diamond with the
toughness of tungsten carbide. Polycrystalline is ultimately an
extremely hard material – harder than tungsten and carbide, so will
outperform a TCT blade by up to 50 times life wise.
Another advantage of the DART PCD blade is that it creates very
little dust unlike the abrasive discs often used, as it produces a shaving
rather than a powdery dust, even in cement board.

When is PCD used?

Correctly applied, PCD tooling replaces existing tool materials such as HSS or tungsten carbide. With the rise in use of wood substitutes (such as wood composites and plastic woods) for future house building in the construction industry – the traditional TCT Blade struggles to cut many of these new materials – leaving an untidy, unattractive cut and the need to replace the blade frequently. This is where the PCD Blade can be seen as a must in any building or timber merchants, as it offers the user an effortless, clean cut in a huge variety of ultra-hard materials. Just to name a few – it will cut through cement fibre board products, such as Marley Eternit, HardiePlank, ‘No More Ply’, MDF and Corian, as well as laminated and melamine surfaces, GRP, softwoods and hardwoods,
plywood and chipboard.

Aimed at: Anyone who needs to cut cement and other dense boards easily and accurately.
Pros: Works well, smooth and accurate cuts.

How do they compare cost-wise?

The cost of a PCD Blade can be up to 10 times more expensive than
a TCT Blade – but there are extra considerations to take into account. When cutting through certain materials, the user often needs to
change a carbide blade daily, while the polycrystalline can last up to 50
times longer – so there is little doubt that the initial cost factor is far
outweighed by the extended tool life. In addition, this doesn’t take into
consideration the cost of having machine downtime and the time-savings associated with using a PCD blade.

DART Tool Group is a trusted and reliable supplier of PCD blades. With a range of sizes starting at 160 mm and going up to 300mm, with 4 to
8 teeth and an extra-large gullet design, which minimises dust and
improves removal of material – you can be guaranteed a smoother, cleaner and more accurate cutting– if you haven’t considered PCD yet, then now is the time!

I tried the DART PCD 250mm diameter saw blade on12mm thick cement
board. The resulting cuts were very accurate and clean – almost planed clean, making the job of joining them accurately easier. My experience of it is that it cuts the board like a knife through butter with very little effort or noise.

The blade sent for the test had just six teeth, spaced about 130mm apart on the periphery of the blade. Each of the teeth has a peppering of PCD particles on it that you can see through a magnifier but not really with the naked eye. There is a large depth-limiting chunk of blade directly in front of each tooth followed by a series of three smaller rounded bumps that serve to clear out the dust as quickly as possible. In comparison to a normal TCT blade, the dust and swarf is incredibly little – due to the lower number of teeth.

There are also six noise reducing slots cut into the blade that dispel heat and therefore reduce or eliminate heat distortion. The blade is a mere 2mm thick and does not cut a thick kerf – reducing drag and friction. I guess some of the smaller diameter blades in this same DART series would be usable in cordless saws as a result.