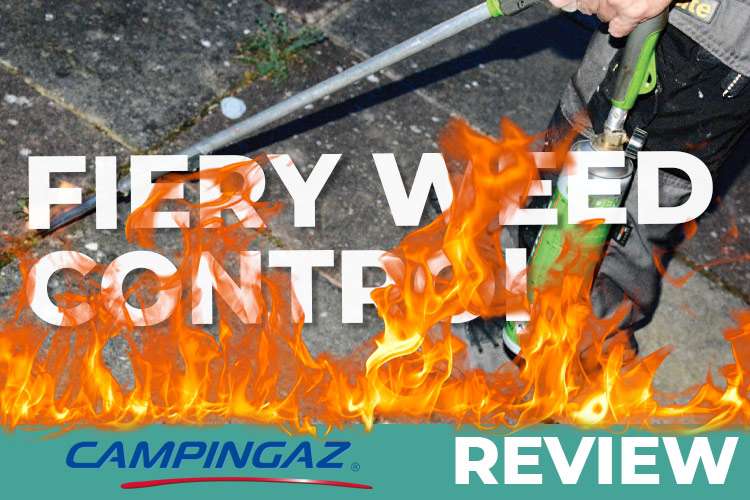 To say that I suffer weeds badly is an understatement. I hate the wretched things but here in the rural southeast they make a permanent onslaught on my garden even in winter. It doesn’t help that I am the world’s worst gardener, and what I always look for is a quick and easy solution to problems, since I don’t have the patience to undertake a long-term weed killing strategy.

Having tried chemical weed killers that offer what seems to me a thorough solution to regrowth, I think my weeds are much tougher or I am not doing it right – because they always grow back.

So, when I received the CAMPINGAZ garden torches I was encouraged that at last I had a solution to my weeds. One that wouldn’t poison the local cats (although I still have a vendetta with the nasty black one that kills birds and messes in my garden) and one that would also be quick and easy to do, even if it needs repeating during growing season. I was sent two gaspowered garden torches – the CAMPINGAZ GT 3000 PZ and the CAMPINGAZ GT 2000 PZ. For easy display in shops the torches are blister packed so that purchasers can examine the business end where the burner is but the gas cartridges are safely inside the packaging. Both torches use the CG3500 GA gas cartridge which is clearly labelled as Garden Gas and is a butane/propane gas mixture.

As tools they are both very simple. They are V-shaped with the burner end of the V, elongated enough for the burner to reach comfortably to the ground while held by an average height user. In the middle of the V there is a plastic handle that provides grip and comfort as well as protection from any heat. On the other end of the handle is the gas valve onto which the gas cartridge is screwed. This valve has a built-in O-ring that provides a safe seal when the cartridge is in place and the cartridge itself has a valve so that it can be safely removed for separate storage when not in use.

Also on the long end of the V is a small piezo button that, when pushed, provides a spark to ignite the gas. This worked pretty well first time, every time I used the torches, even after a long interval between “burns”.

The V shape also allows the user to balance the tools in the hand so that they can swing easily forward and back and from side to side to provide maximum coverage when killing weeds. It is important to read the instructions contained in the pack, not only for safe use of the burners, but also to understand how to use them most efficiently.

These gas burners work by scorching the leaves of the plants. This causes them to die back and become unable to absorb the light and nutrients necessary to survive. It should not be necessary to reduce the plants to ashes – merely to scorch them. In fact, if the burning is too intense, there is a danger of fire that could spread to plants and other things nearby. Care is definitely needed to target
the unwanted plants and avoid peripheral damage.

I mostly used the GT 2000 PZ gas burner because I was tackling the weeds growing up between the joints in my patio and on my front path. This burner is about 100mm long and 15mm wide and hidden underneath is a series of small holes that cause the flames to jet out of the burner quite intensely. This helps the flames to wilt bigger leaves quickly and also enables you to get close to edges and
borders. Don’t try using these garden torches in wet weather because the wet leaves wont wilt away as easily.

The GT3000 PZ with its 50mm diameter burner claims that it is up to four times faster at killing weeds than the standard 22mm diameter burner nozzle. I used it on some stubborn grass growing on my path and patio. The flames are fierce, as evidenced by the pressurised gas “bubbling” noise that you get from the burner. And they are also efficient. The burner also contains the flames from going too far so that you can direct them pretty accurately to where you want them. Definitely good for the stubborn individual dandelions growing on the grass.

I was able to use these garden torches over a period of several weeks and I found them easy to use. Getting them out of the shed and attaching the gas cartridge (stored separately for safety) takes only a matter of minutes. Covering areas and individual weeds is effortless and can be done without bending down. Accuracy is good too – it is fairly easy to avoid burning plants that you don’t want to target.

In my experience of using these garden torches, they are a very useful way of controlling weeds since they provide one more weapon in the armoury. There are still certain places (like near the oil line leading from my oil tank to the boiler) where clearly it would not be advised to use the torches. Also, chemical weed killers may be needed for some other situations where the flames may not be
the right solution. I found that I had to “reburn” every couple of weeks or so to keep the weeds permanently down, simply because some weeds are very tough and need repeat treatment. Also,
new weeds germinate and grow in between treatments and can get quite big surprisingly quickly.

I don’t think that the CAMPINGAZ torches turned me into a better gardener, but they certainly made weed control a quicker and more efficient process and one that can be used when the weather is dry. Chemical weed killers have a lot more stipulations as to how and when they can be used as well as being less environmentally friendly.