TOOLKit Online > Features - Industry News > All the fun of the fair – On hand at Toolfair, Sandown Park 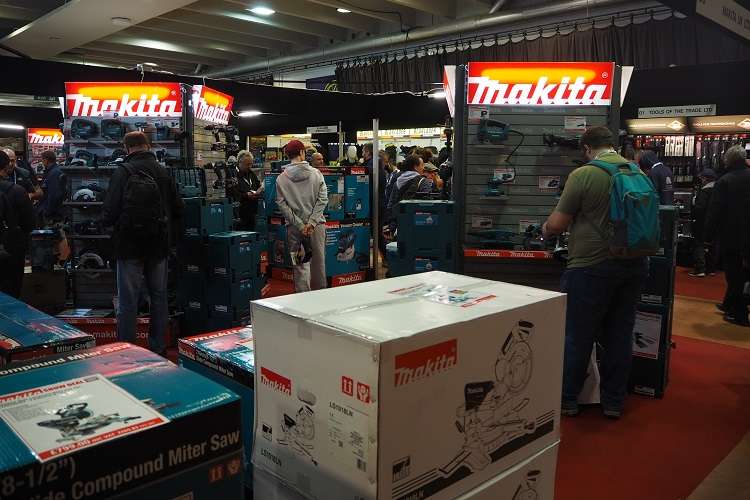 All the fun of the fair – On hand at Toolfair, Sandown Park

I FEEL quite upbeat with the news that tool shows and other exhibitions are slowly making a comeback after the ravages of Covid. First on my calendar that didn’t need a trek to places north of Watford was the Toolfair at Sandown Park in Greater London.

In previous years, for parking and swift entry reasons, arriving on time is a good idea – and it was true this year too despite the expected Covid effect on potential visitors. I was met by a longish queue for entry. But there was time for an entertaining and, dare I say, controversial discussion about Covid, tool shows and global warming with my fellow punters in the queue. These subjects would be hard to shoehorn into a coherent argument, but we tried – without coming to blows.

Toolfair stewards ran a well-rehearsed system for entry and the online invitations ensured that most visitors came well prepared with paper or phone scans to speed the process.

The traditional free gift – a belt pouch from TOUGHBUILT – had to be claimed via a simple scanning process, but from the look of the uptake it was a popular offer. Some users might have then been tempted to look at the TOUGHBUILT work belt as a jobsite solution too.

Lots of extra work has been done on the TOUGBUILT trestles too. They are now so versatile, adjustable and simply tough, that they are very desirable additions to the jobsite.

Inside the halls there was definitely a buzz that didn’t abate in the hours I was at the show. This proves that the appetite for tool fairs and tool shows from end users is undiminished.

I am sure that the special sections devoted to electrical and other trades also helped to bring in visitors because the citizens of London in particular, seem to be buying into electronic upgrades that integrate everything from heating, internet, TV, security and lighting systems. The tradespeople who are switched on enough to ride this particular wave are doing very nicely, thank you.

The Toolfair part of the show really revolved around a few large stands from HiKOKI, Makita, Dewalt, Wera and Milwaukee. But all of them were very busy. There were smaller stands from power tool brands like Festool and Mafell that were really focused on demonstrating rather than selling. In an industry where trades seem to be busier than ever and where progress on tool development continues, despite all the Covid and other disruptions, it sounds like quite a good strategy to re-engage with end users

HiKOKI keeps up the pressure

HiKOKI has been able to launch lots of new tools during lockdown as well as undergoing a major restructuring and movement of head office in the UK. I have tried a few of the new tools – the cordless jigsaw, router and angle grinder have been very welcome additions to my toolbox. The fact that I had to wait for some of them to come into stock wasn’t always a Covid shipping problem – the tools were genuinely selling out as they came into the shops.

Clearly there is much more to come from HiKOKI and its associated brand Metabo. I have been hearing all sorts of speculations on blogs and user groups about standardisation of battery platforms between the brands. Metabo does have a bit of a history with licensing its battery platform to other brands, so it wouldn’t necessarily be that much of a bombshell. But then you don’t want to believe everything you hear either.

And the fact that in the USA the brand identity is Metabo HPT provides enough room for the conspiracy theorists to speculate. But I stress – these are still speculations, and I wouldn’t dare to second guess what the decision makers are discussing.

Milwaukee has enjoyed several years of sustained investment and development and the result is a range of increasingly powerful cordless tools that have instant appeal over a range of trades. It seems to be a case of if you need it, Milwaukee has it – with a natty, lightweight, umpteen Ah, up-to-date battery platform to run it on too.

I looked at a few of the tools on display – a demo would have been even better – and I was particularly taken with the cordless router (not trimmer). It looked so well engineered and designed that I could imagine end users adopting it wholesale on the jobsite.

There is nothing like a bit of jeopardy in a demo to bring in the crowds and although I have seen it before, the Sawstop system on the new Festool site saw was definitely worth another watch.

I can never get over how the sausage (meant to represent a finger) manages to transmit its vulnerability to a spinning sawblade and said blade is then stopped in an instant before any serious wounds can be inflicted. I have seen an American reviewer use his own finger in the same demo. He got off pretty well scot free, but the squeamish part of me prefers the near sacrifice of the sausage.

Knipex is another company that seems to have embraced innovation with superb design. I would guess that, in the last two years, at least a dozen new tools have reached market now. I liked the pipe cutters and wire strippers, and the miniseries of grips and pliers are ideal for getting into small spaces. They manage to give the user the feeling that they are real, capable tools despite their small size.

Wiha and Wera shouldn’t be mentioned in the same breath, but I am feeling cavalier,
so I will. The Wera juggernaut is so well-oiled that it seems to have been unaffected by the pandemic and related difficulties – it is great that there is that level of resilience around.
Not to be outdone, the Wiha stand was so busy I couldn’t even get a very close look at some of the new kit or chat to any of the Wiha people. But ‘busy’ probably tells me all that I need to know.

An interesting and timely conversation with Paul Dowding from D and M Tools gave me a good insight on how the independent tool sector has been coping with pandemic conditions. As someone who has witnessed a few ups and downs and is still successfully in business, he has practised what he preaches – and it is probably worth an article by itself.

But for the seekers after tool deals, more Toolfairs are scheduled up and down the country over the next few months and the very popular D and M Tool Show is already in the planning stages for next October. See you there if all goes well!