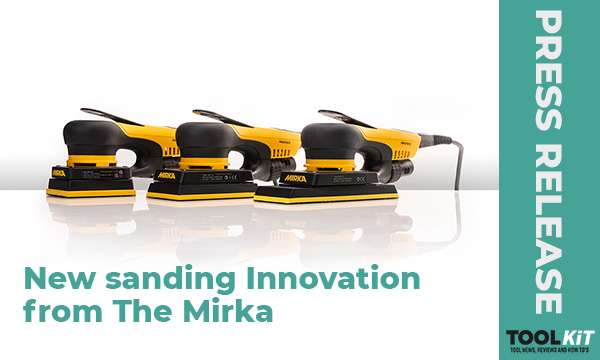 Mirka is spearheading sanding innovation in 2022 with the addition of the new Mirka® DEOS 343CV sander to the DEOS product family. Smaller than other products in the same range without compromising the power output, this new tool’s design makes it perfect for detailed work, particularly in areas previously harder to reach – gone are the days of folding a sheet of sandpaper eight times over to get the tiniest crevice as smooth as a baby’s bum.

The Mirka® DEOS 343CV has been developed by the R&D team in Jeppo, Finland, with the everyday user in mind. Its low profile allows the tool to get closer to the surface, making it easier to control, and the lightweight, ergonomic design provides the user with a comfortable grip that really mustn’t be understated – anyone who’s spent two hours sanding the same surface will know what I’m on about.

From detail sanding to window frames, the versatile Mirka® DEOS 343CV won’t give up on you, as it is only available as a corded tool. Though this means that it is dependent on a nearby, available socket to be plugged into, it is also guaranteed to keep going until either the job is finished or you’re done for the day.

Despite being a compact direct electrical orbital sander, the Mirka® DEOS 343CV’s brushless motor provides the power that enables it to perform at the same level as the bigger members of the DEOS family. Compatible with the Abranet®, Abranet Ace® and Iridium ranges of premium abrasives, this new tool will deliver a consistent scratch pattern and a high-quality finish, no matter the application.

Pete Sartain, industrial sales manager for Mirka UK, says, “Tooling innovation is an ongoing commitment for Mirka and the launch of the DEOS 343CV is the next chapter for us. Even though this tool is small, we believe it has a big future because of its versatility and ability to make the hardest and most inaccessible jobs look easy.”

So, if you’re tired of looking at surfaces rougher than a pulpwood truck in a cotton patch, you know what to do.

To view more about the range visit The Mirka webste: mirka.com