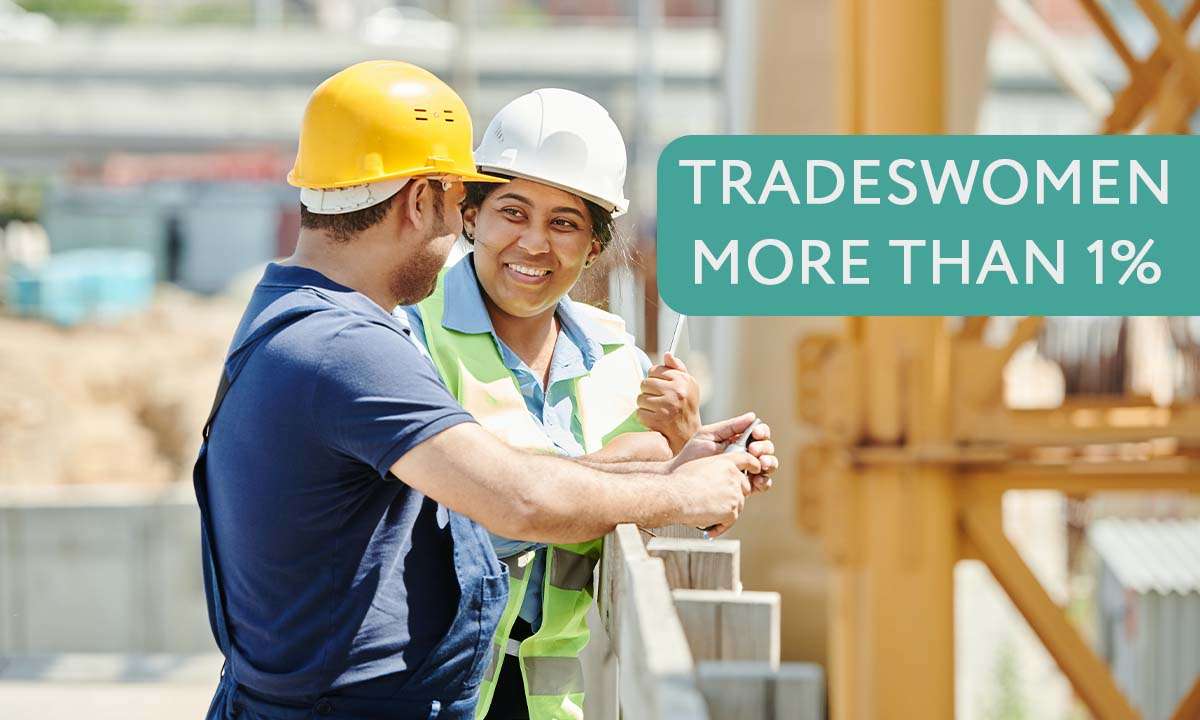 Three in five people would hire female plumbers, carpenters, electricians and builders to work in their homes, research by the Chartered Institute of Building (CIOB) has found.

We know sexism in the construction industry won’t be making national headlines any time soon – after all, it’s so deeply entrenched that most people barely even notice it – but the CIOB’s latest survey proves that it’s no closer to being eradicated in 2022 than it was a couple of decades ago.

Though the general public seems to be open to the idea of hiring tradeswomen for completing domestic jobs, the reality is that only 1% of the UK’s tradespeople are female. Compared to North America’s 10% (or more, in certain regions), the UK is clearly lagging when it comes to inclusion in construction workforces.

In fact, the UK is so far behind that 10% of the survey’s respondents said, though they’ve tried to find a tradeswoman for their jobs, they have had no success. The CIOB has said it hoped its findings would encourage more women to learn a trade.

The survey found that, while around a third of respondents would prefer to hire a female tradesperson, 12% totally ruled it out as an option.

Helping support women in trades was the most common reason given for wanting to hire a female tradesperson – half of female respondents expressed this opinion, compared with less than a third of men.

However, some respondents also said they would feel more at ease having a woman carry out work in their home.

To raise awareness of the UK’s lack of female tradespeople and (hopefully) inspire construction companies to develop more diverse workforces, the CIOB hosted an event in Parliament with Emily Thornberry MP on June 16th.

People from across the construction industry, professional bodies and academia were in attendance, but the focal point of the event were the representatives from the North American campaign group, Tradeswomen Building Bridges, and the University of Westminster, who attended the event to share their experience of increasing female representation within key trades carrying out work both domestically and on commercial construction projects in the US and Canada.

“Attracting and retaining talent in construction has been a headline issue for years – but even in the knowledge that the industry needs to be better at attracting people, this quite shocking figure that only 1% of UK tradespeople are women, needs to change.

“Bringing more women – and others from groups that are currently underrepresented into the industry – is vital for the sector’s success and Tradeswomen Building Bridges are an inspiration to us all.

“Our Equality, Diversity and Inclusion Charter has now been signed by almost 70 organisations since it launched last year, and while this is a step in the right direction, there is still work to be done and our survey supports that. There are householders and clients out there who would clearly like to be able to work with female tradespeople, but there are not enough of them, and we need to close that gap.”

Progress in the US

Susan Moir, founder of Tradeswomen Building Bridges, says: “Dramatic increases in the numbers of women working in the manual construction trades in North America have been led by the tradeswomen themselves. Forty of us have come to London to share our stories and successes. We have come to learn and hope to inspire the UK industry to open up to more tradeswomen.”

Emily Thornberry MP says: “The UK construction industry has a skills shortage and with only 2% of construction workers being women, that is hardly surprising. It is vital for the growth of our economy that the skills of all our citizens are harnessed. That’s why I am delighted to be sponsoring this important event.

“In order to get more women in the industry, we must fight discrimination on sites and among employers, and stop perpetuating the stereotypes which divide up job roles according to gender. This will only happen if we place this issue higher up the political agenda and provide it with a greater focus.”