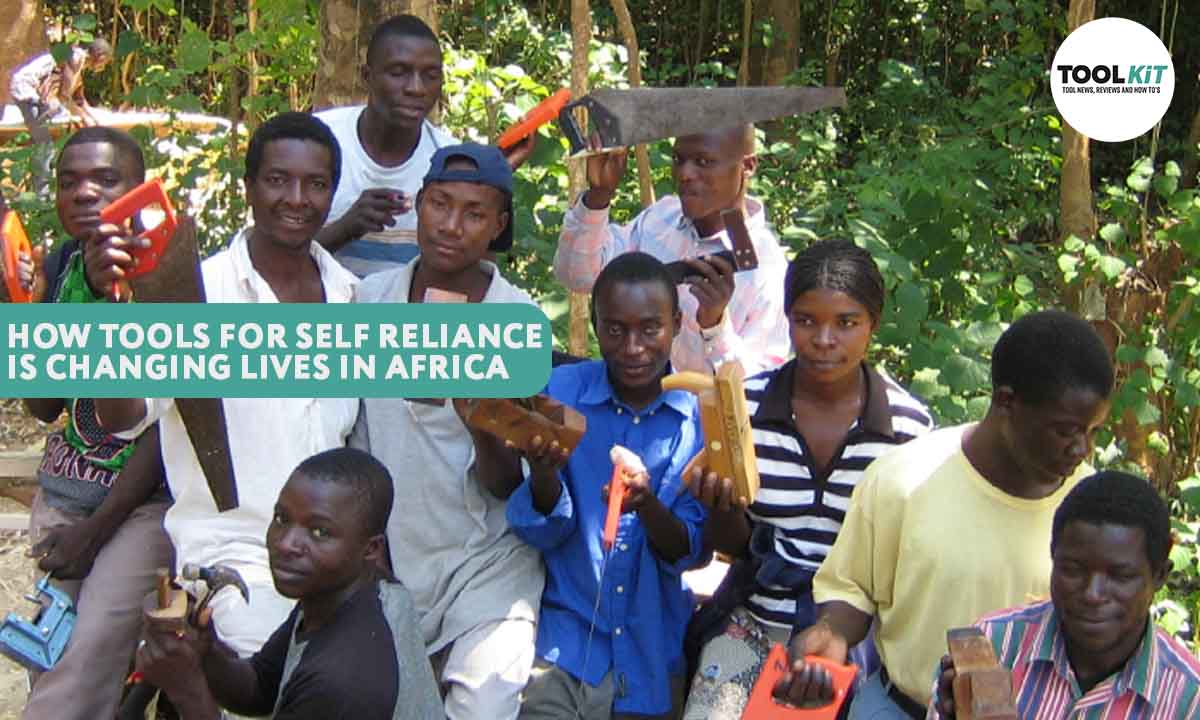 How Tools For Self Reliance is changing lives in Africa

With all the Homebases, B&Qs and Screwfixes up and down the country, it can be easy to forget that not everyone in the world is able to just walk out their front door, go to the nearest DIY store about and pick up whatever tools they might need for their projects.

In underdeveloped countries, especially, access to what we’d quickly assume are ‘essential items’ can be incredibly tricky, but it’s not like these populations can live without tools. That is precisely where Tools For Self Reliance comes in.

The charity, which was founded in 1980 by a handful of dedicated volunteers, has spent the last four decades working directly with small-scale community groups across five African countries: Uganda, Ghana, Malawi, Sierra Leone and Zambia.

Having established partnerships with local organisations, Tools For Self Reliance not only collect, refurbish and deliver donated tools to these communities, but they also pair their donations with training programmes designed to increase the autonomy of the individuals they work with.

How It Came To Be

In the late 70s, after working with and visiting multiple volunteer programmes in Africa, and becoming subsequently disillusioned with development projects in the continent and the ways in which overseas assistance would fail to trickle down to the grassroots, Glyn Roberts led the efforts to establish Tools For Self Reliance.

Aiming to help relieve poverty amongst local populations in the five countries identified as areas of focus, the organisation was formally registered as a charity and, though raising awareness and campaigning are still integral parts of their plans, the organisation’s focus is on providing a more people-centred approach to assistance.

When they first got the ball rolling, the tool collection and refurbishment process was exclusively UK focused, with donations being collected all around and then refurbished and sent off to various communities. Nowadays, however, Tools For Self Reliance has groups of hundreds of volunteers spread all around the world, collecting, recycling and refurbishing tools.

Through the partnerships they’ve established locally, Tools For Self Reliance is better positioned to identify the needs of local communities and the more productive ways in which to engage with the population.

As such, and carrying on their philosophy of a people-based approach, the organisation has developed various training initiatives, which include not only technical trade skills, but also business and financial management, health awareness, and life skills. Upon completion, trainees receive a start-up kit of tools, and are supported in forming their own businesses.

In January 2020, for example, 100 women in Waterloo, Sierra Leone, began their tailoring training with our partner Baptist Women’s union as part of the ‘Wealth, Health and Wellbeing Project’. This project was supported with a grant from The Turing Foundation and since it’s begun, over 200 people have taken part and received training in tailoring.

To add to the vocational training provided, Tools For Self Reliance also supports communities with regular literacy and numeracy sessions, as the aim is for their students to be independent in their business practices after completing these programmes. Learning practical numeracy – such as using a tape measure and counting units – and basic literacy (alphabet recognition and spelling for note-taking and record-keeping) are all pivotal in the establishment of their businesses.

Take Michael Ayela as an example: born and raised in Uganda in a family of nine, Michael had had to leave school early as his family simply could no longer afford for him to go. Untrained and unqualified, Michael struggled to find work and spent much of his time idle. However, wanting to learn a skill, he signed up for a carpentry course with Green Ribbon Foundation and Tools For Self Reliance, where he learnt how to make sofa sets, tables, chairs and other furniture.

He is now working with Green Ribbon Foundation, making sofa sets as part of their income generation work. He also does occasional self-employed work, making items to order to supplement his income. He can now support his family, and help buy soap, medicines, and food. He plans to start saving money so that he can buy a plot of land and set up his own furniture business.

Michael is only one of thousands of people whose lives have been forever changed by the work developed by the volunteers who keep Tools For Self Reliance running. Just this year, over 15,000 tools have already been shipped to Africa and, coupled with all the trade courses now available through local organisations, Tools For Self Reliance is consistently enabling people to transform their lives and build sustainable livelihoods.

How You Can Get Involved

As a charity, Tools For Self Reliance is always looking to raise more support through their campaigns and they’ve set up various channels through which we can all contribute something.

If you’ve got any tools lying around the house that you haven’t touched in a while – we all do, let’s be honest – why not donate them and help change someone’s life? And ‘tool’ really is just an umbrella term here… Anything from combi drills to screwdrivers is accepted, of course, but the organisation is also looking for sewing machines, haberdashery items and even plywood.

All these items can be donated to Tools For Self Reliance’s workshops in Netley Marsh but if you’re not in the area, there’s no need to worry – there’s a whole network of volunteer collectors around the country who can take donations.

Another way to get involved is through the more traditional money donations. This month, the charity has partnered up with The Dalgleish Trust, who have promised to match all donations received in June 2022 up to a total value of £5000 – which means every penny you donate will be worth double!

You can also keep up with everything happening with Tools For Self Reliance through their newsletter, available to sign up here.