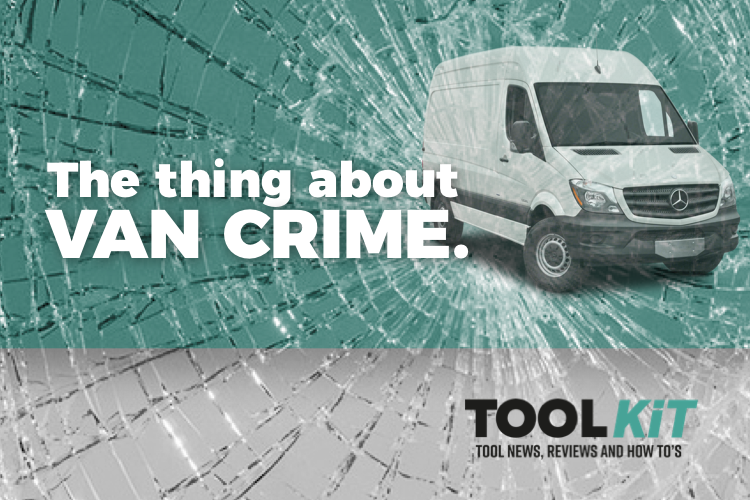 The Thing About Van Crime

If you think you can just lock your van, hide your keys and avoid van theft – then this article may help you realise that more protection is needed to keep you and your tools safe.

On average, a tradesperson’s van is broken into every 23 minutes in the UK, which has a devastating impact on tradespeople’s livelihoods. As well as incurring additional costs to recover work tools and goods, traders also miss out on work which can cause signification financial worry.

Van Break in every 23 Mins

With van theft on the rise, there’s a huge market out there for second-hand tools, which can make this nerving task rather rewarding for thieves.

Van crime cases vary in damage, with some owners returning to find the back of their van empty, some having to deal with smashed windows and broken doors, and in the unluckiest cases – some tradespeople realising that their van has been taken.

The figures for van crime are extremely alarming and result in small businesses and the self-employed losing more than £61.9 million in stolen goods since 2016.

It’s true that your insurance provider will most likely support you financially and help to recover your stolen goods, however being a self-employed trades person, it’s the sudden loss of work which can be really damaging.

In a recent survey, the biggest spike of van and tool theft is primarily in the South West, with a hammering 81 per cent increase in incidents since 2016. Closely followed is London with a 67 per cent rise and the North West is shortly behind with a staggering 63 percent increase.

Van theft crime claims vary depending on the expense of tools and goods stolen, and whether or not the van itself was actually taken away. But, on average the North East had the highest average theft claim – £2,033, with East Anglia following closely behind with an average of £2,005.

The actual sum that self-employed traders loose when they are victim of van theft is much higher, once you consider replacing the goods, insurance fees and the time taken off work.

Opportunist thieves and sophisticated criminals are responsible for tradespeople losing out on thousands of pounds, as they search for vans that contain expensive tools and goods inside. On average, the value left in a UK’s tradespersons van overnight equates to £2,881, and thieves are actively aware of the costliest tools. There is a correlation between the growing trend in thefts across the UK and vans being broken into, which shows there is so sign of this crime slowing down any time soon.

There are various ways that these sneaky thieves access vans, with a technique known as ‘peel and steal’ becoming increasingly popular. It revolves around the thief applying pressure to the side or rear van door and peeling down from the top.

Although, as technology advances, criminals have found more intelligent and less obvious ways of stealing a worker’s van. Electronic key fobs are assisting thieves with illegal access into vans across the UK – avoiding the need for forced entry. Thus, benefiting the criminal, making it harder for them to be caught out, and proving difficult for traders to receive compensation from their insurers. Put simply, the process involves two thieves acting in close range to a vehicle and its key – using advanced software to interpret the signal and create a replica key fob.

With criminals becoming more intelligent and aware of van theft solutions, it’s crucial that all tradespeople take stronger measures to protect themselves and their van from theft.

What is being done?

If you have ever been a victim of van theft, then you will know how frustrating the wait for an insurance pay-out is. And with the majority of red-handed van thieves receiving just a small fine or community service, traders are unhappy with the punishments being handed out.

Therefore, tradespeople are coming together to demand that stronger laws against van theft are put into place There was a recent petition called ‘Tool crime deserves time’ suggesting that van theft criminals should receive a jail sentence for this illegal behaviour – which set a target of 50,000 signatures. A statement from the founder of the petition expressed “Our Government must look strongly into the growing problem of tool theft from vans and must impose much tougher penalties on those convicted of these crimes.”

What are your thoughts on Van Crime…comment below:

18v Battery2021AbrasivesaccidentsacquisitionAdhesiveAdhesive Reviewadvent calendarair polutionAir Quality Standards Regulations 2010Alternative to ChemicalsAngle GrinderAny GoodApplicationapprenticeshipsApril WilkersonArgosarticleAutionAutumn Tips
We use cookies on the TOOLKiT website. To help us remember the stuff you like, so we can help you enjoy more of the same. By clicking “Accept”, you are fine with this and we are good to go.
Cookie settingsACCEPT
Manage consent