TOOLKit Online > Features > How Do We Know That the Screws We Use Are Up to Scratch? 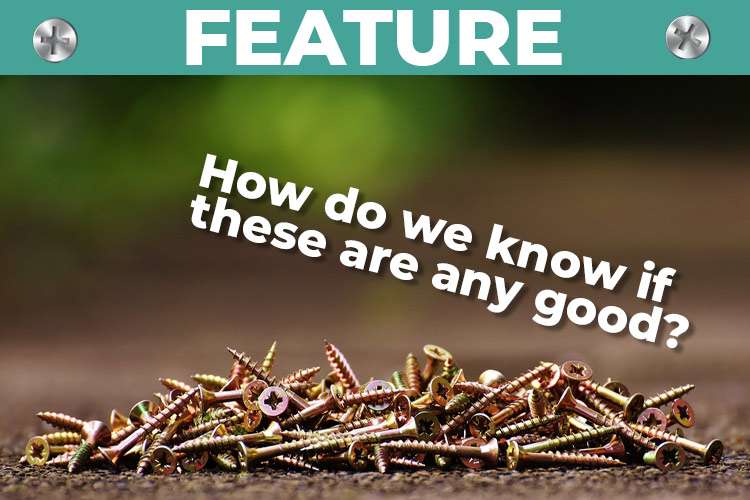 How Do We Know That the Screws We Use Are Up to Scratch?

Thankfully the days of limited choice of screws, drilling tedious pilot holes (by hand) and the resulting relatively weak screw holding power are gone. Electric and then cordless drill drivers have seen to hat, and the screws needed to use with these machines have evolved into sophisticated things that may be quite expensive compared to the “old days”, but they work incredibly well.

But, and in my view quite a big but, there is still a lot of quality variation in the screws on the market. Some are just badly made from inadequate materials so they break easily and the driving heads strip easily. Some are badly designed so that they don’t start easily or drive straight, or they “bridge” very easily when fixing to another flat surface.

Some may be more susceptible to corrosion than others. One of the reasons why “old timers” used brass screws in joinery and furniture – particularly into Oak and chestnut – was that the tannins in the wood would corrode steel screws leaving a black stain. But are modern coatings proof against tannin corrosion, or water damage when used outdoors on decking for example? I am sure that some
screws slowly corrode when holding down a decking plank that may be soaking wet for much of a British winter, for example. Perhaps this may put a time limit on the decking’s safe working life?

After quite a few chats with makers and screw experts and an inordinate time on Google, it is clear that there are very clear European Standards for screws covering strength, corrosion, plating and lubrication to name but four. But I also picked up a feeling that the whole issue is a lot more complicated than it looks at first. Some manufacturers conduct their own tests and then get a Declaration of
Performance for a CE mark, while other suppliers rely on the manufacturers they source from to ensure that the CE standards are met so that the screws can be legally sold. Can this lead to the kind of variations in performance I have mentioned above? Or are these variations just reflecting the needs of a huge market in screws and the CE standards need to be broad enough to encompass the full range of screws on offer?

I have also found out that the screws I use every day should not all be the same. Stainless screws used to hold hinges onto oak doors are softer than carbon steel ones, so you have to take it easy on the driver – but they are safe to use in oak.

Some screws I have used are case hardened. This makes them rigid and easy to drive, but they are quite brittle and can be snapped off, while others made of softer steel – particularly long ones, can bend when being driven, but are perfectly fine for use in standard joinery tasks. I am sure there must be some mention of these differences in EC standards regulations, but I can’t find any. I am very happy to be enlightened by anyone with more knowledge of such things!

The use of salt spray testing is commonly used to test corrosion resistance and this seems to be something that is at least easily comprehensible – the best screws are the ones that corrode least after the longest time under the salt spray. But I guess that screws used indoors on simple joinery won’t need to be corrosion resistant – so no need for the extra expense of a resistant coating. Coatings can also be lubricants to help ease the way of a power-driven screw into hardwood without having to drill a pilot hole. Sometimes coatings are needed sometimes not.

Screw designs are also subtly different too. It is pointless using a self countersinking screw to fix a hinge – it just makes the head stick up from the hinge face. Smaller headed screws are used to fix flooring to avoid splitting the rebated edges, but they must still be CE marked so that they can be sold – so are these differences taken into account in the regulations?

This rather brings me to the point where end users might have to be much more aware of the screws they use and where they use them. It is clear that there are some situations where the “wrong” screws can be used with potentially problematic results. Will we get to a situation where we need to check the Declaration of Performance of every screw we use in every particular situation?

I am sure that happens on some high-end construction projects already. Or maybe in the short term the only advice to give to tradespeople is to use name branded screws from a company with a reputation and brand to protect. Companies that take testing and design seriously and whose products are respected in the market. It may be a slightly more expensive solution in the short term, but may prove cheaper in the long term – a box of inferior cheap screws that don’t do the job properly won’t do a lot for customers or your reputation.

Peter is our in house tool and equipment reviewer. Peter has a background in carpentry with a wealth of experience in DIY and tools of all types. There is no job Peter would not have tried his hand at over the years.

ClothingCraig PhillipsDraper ToolsfeatureFeinhealth and safetyHSEPower ToolsPPEProfessional ToolsPro ToolsPro Tools ReviewreviewSafetySnickersTOOLKiTTOOLKiT ReviewTOOLKiT ReviewsTool Reviewworkwear
We use cookies on the TOOLKiT website. To help us remember the stuff you like, so we can help you enjoy more of the same. By clicking “Accept”, you are fine with this and we are good to go.
Cookie settingsACCEPT
Manage consent