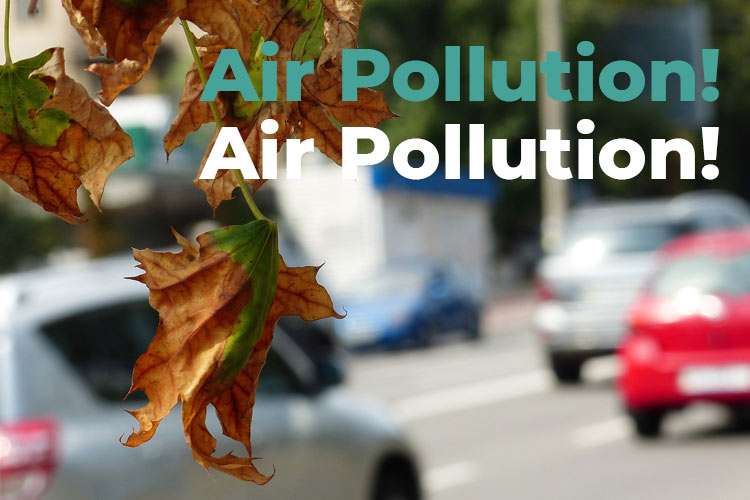 However air pollution is by no
means solely a London issue, with
Glasgow’s, Manchester’s and
Birmingham’s air recorded at 60%,
50% and 40% respectively…

Nitrogen dioxide exposure can contribute to respiratory conditions and
diseases. Construction workers are particularly vulnerable due to their proximity to polluting vehicles. In 2005, the Health and Safety Executive found that 230 construction workers died from exposure to diesel fumes (this figure has not since been updated.)

Particulate matter greater than PM10 gives rise to soiling and can affect the lungs and the heart. Particles less than PM10 can cause more serious problems as they can get deep into the lungs and into the bloodstream. Construction dust and exhaust emissions are key contributors to high PM levels.
How polluted is our air?

Air quality is high on the global agenda, with the Breathe Life campaign reporting that 80% of cities worldwide exceed the World Health Organisation’s (WHO) guidelines for safe air. In the UK, these efforts have primarily focused around London, which measures 50% over the safe annual level of PM2.5. The European Union sets legally-binding limits for concentrations of outdoor air pollutants, and these directives were incorporated into UK law by the Air Quality Standards Regulations 2010. In 2017, London breached the annual air pollution limit in the first five days of the year.

However air pollution is by no means solely a London issue, with Glasgow’s, Manchester’s and Birmingham’s air recorded at 60%, 50% and 40% respectively over the WHO’s recommendations for safe air. The UK as a whole is an average of 20% over the safe level of PM2.5. Outside the UK, Dublin’s air is 10% over the safe level.

Meanwhile, 59% of the UK population live in areas where nitrogen dioxide
pollution is above the legal limit set by the EU. As national and international bodies around the world focus on this issue, it is
essential that the construction industry keeps up with changing regulations and practices.

Survey by Considerate Constructors Scheme reveals urgent need for greater awareness and understanding across the industry Produced in response to the survey findings, the Scheme’s ‘Spotlight on…air pollution’ campaign provides vital resources to enable the whole industry to tackle the far-reaching effects of poor air quality.

While 84% of survey respondents acknowledge there is an issue with air pollution in the construction industry, nearly two thirds (64%) feel the industry is not doing enough to tackle this issue. The survey, which involved over 600 respondents from across the UK and Irish
construction industries, also revealed:

The national ‘Spotlight on…air pollution’ campaign has been launched by the Considerate Constructors Scheme to help raise awareness and understanding of how the construction industry can address the issue of air pollution from their activities in and around construction sites. While some of the survey results were encouraging, there are clearly areas for improvement and the need for the industry to work together to help reduce air pollution.

Hosted on the Scheme’s Best Practice Hub Spotlight on…air pollution’ provides a variety of practical steps, case studies, resources and regulatory information to help the industry address this issue in the short, medium and long term. The Scheme, which makes around 18,000 monitoring visits to construction sites, companies and suppliers every year, is in the prime position to help raise awareness and understanding of this issue throughout the UK and Irish construction industries.

The Scheme, which makes
around 18,000 monitoring
visits to construction sites,
companies and suppliers
every year…

Practical case studies on how to address the issue include contributions from: Canary Wharf Contractors Ltd; Costain; the Institution of Civil Engineers; Interserve; Mace; Sir Robert McAlpine and TfL (Transport for London).

Considerate Constructors Scheme Chief Executive, Edward Hardy said: “A staggering 40,000 deaths a year are linked to air pollution in the UK, and many people are suffering long-term health problems caused by poor air quality. As construction is a significant contributor to air pollution, it is essential for the industry to put measures in place to clean up our air by working together to reduce our impact on air quality.

“The Scheme’s ‘Spotlight on…air pollution’ campaign provides everyone within the industry access to a practical suite of resources including best practice, guidance and case studies from Scheme-registered construction sites, companies and suppliers on how to tackle this issue, as well as guidance from organisations including the Institute of Air Quality Management, Healthy Air Campaign and the Greater London Authority. “We are proud to be at the forefront of collaborative efforts to tackle air pollution, having partnered with the Institution of Civil Engineers to produce Scheme posters for registered sites, companies and suppliers to raise the issue of air pollution to their workforce. The Institution of Civil Engineers has also recognised the value of the industry being committed to the Considerate Constructors Scheme, having highlighted Scheme registration within its London Air Quality Taskforce report published in 2017.”

Professor Peter Hansford FREng FICE, Chair of ICE Air Quality Task Force commented: “The Institution of Civil Engineers is delighted to be partnering with the Scheme for the launch of its ‘Spotlight on…air pollution’ campaign. The Scheme offers a golden opportunity for the industry to ‘up its game’ in relation to air quality around our construction sites and is a key driving force in helping to address this issue across the industry.” ‘Spotlight on…air pollution’ will continue to be updated with more examples of best practice and case studies. If you have any ideas for additional resources to become part of the Campaign, please email [email protected] to send in suggestions.