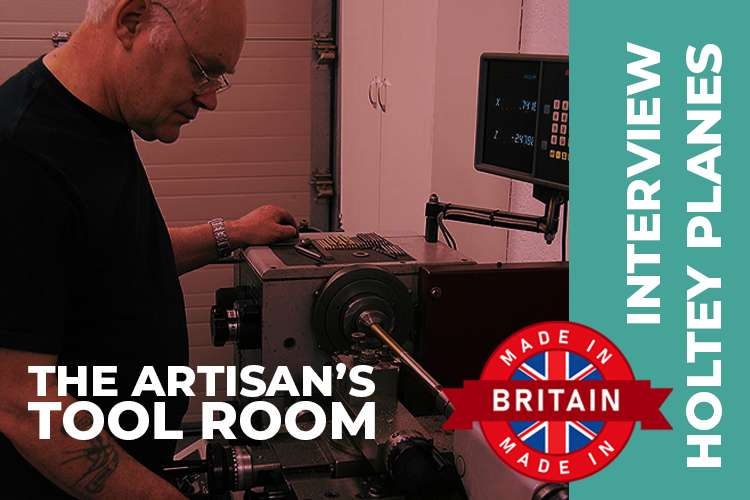 About Karl Holtey – the founder of Holtey classic hand planes

Karl Holtey is the proud owner of Holtey classic hand planes, which is famous for crafting handmade and very functional hand planes here in the UK. His website really delves deep into the process behind each build, and how his hand planes stand out from the crowd. After discovering the work he does, I wanted to speak with Karl to understand how he got to where he is today, and how he discovered his love for woodwork!

(How did you get into hand planes?)

Karl was born in England in 1948 and after his school days, he put his hand into various apprenticeships and was eventually employed by a building and cabinet making businesses.

His interest in wood planes was inspired by his job of restoring old Norris hand planes at work, and recalls that the first hand plane he was really inspired by was the Norris 17.5 inch A1 – which he says was in ‘absolutely super condition’.

From that day, Karl said that the whole idea of building hand planes has always been a one-man crusade.

(What did you do before hand planes?)

In his early days, Karl started out as a cabinet maker and for some years, enjoyed putting his hand in the joinery trade. He also boasted an interest in model engineering which he thoroughly enjoyed and loved the design freedom it offered.

With his design and hands-on experience, Karl decided that he had the ability to make his own hand plane. He knew he could compete with the standard of the Norris A1 that he had seen.

During his early working life, Karl was often asked to restore antique hand panes, so he had a good idea of what goes into the making of a hand plane and its components.

Over the years, Karl came into contact with many other craftsmen, dealers and collectors – who all helped him to continually improve.

Every time he buys a new machine or tool, Karl says instead of increasing his speed, it helps him to increase his standards. And that’s exactly what he does with his hand planes – he always strives to make the next hand plane better than the last.

In fact, regardless of advances in technology, his work is seen by many as the benchmark in precision and quality for these types of tools.

(Where do you make your hand planes?)

Karl still works out of his small tool room based in the Scotland. He says it’s far better equipped than most of the other back garden entrepreneurs that still make planes to this day.

He says he considers himself to be rather unique, more than a maker but definitely not just a manufacturer.

Over his years in the trade, Holtey developed materials and his own unique designs, as well as investing heavily in his own high-quality machinery that benefits both the craftsmen and the collector. He’s built up such a reputation that buyers come from all over the world to pick up one of his sought-after hand planes.

(Tell us more about your products and what make them unique? )

Karl makes his planes as one-off commissions or in very small batches, meaning he can focus on the precision and quality of every little detail. He never uses a production line, like some of the larger companies and makes it clear that every part of the plane is made by him.

Karl says using machine tools in his workshop allows him to keep up the precision and finish that his customers expect, and he is famously known for. These tools help Holtey to produce standards that ‘only other makers can dream of’ although states that they certainly don’t automate the process and considers his planes a genuine handmade item.

A single one of his planes may take up to two hundred hours of manual work, and thus comes with a price. His planes aren’t cheap, but I suppose that saying is right – “You get what you pay for”

His low angle planes start at around £2500 with those larger panel planes reaching up to £7000.